From black sandy crags to never-ending wavy golden dunes, the famous beaches around this most blessed Canary island are straight out of your wildest sunshine fantasy. Roll out you towel on some of the loveliest right here… 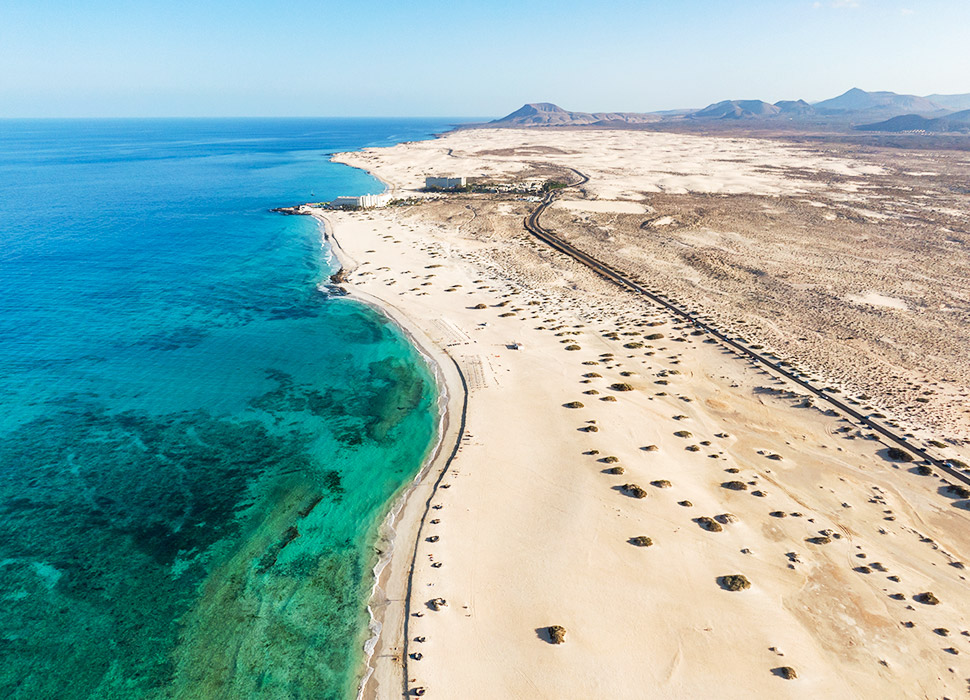 Stretching some ten kilometres south from the main resort of Corralejo proper, the Grandes Playas gets wilder the further from town you venture. Up north in the vicinity of the upscale hotels you’ll find plenty of nice amenities, bars, eateries and watersports. Venture south, though, and you‘ll soon be amid the dunes of the protected Parque Natural de Corralejo. The beach down here is broad and quiet and a great place to commune with nature – and indeed naturists, if that’s your thing. 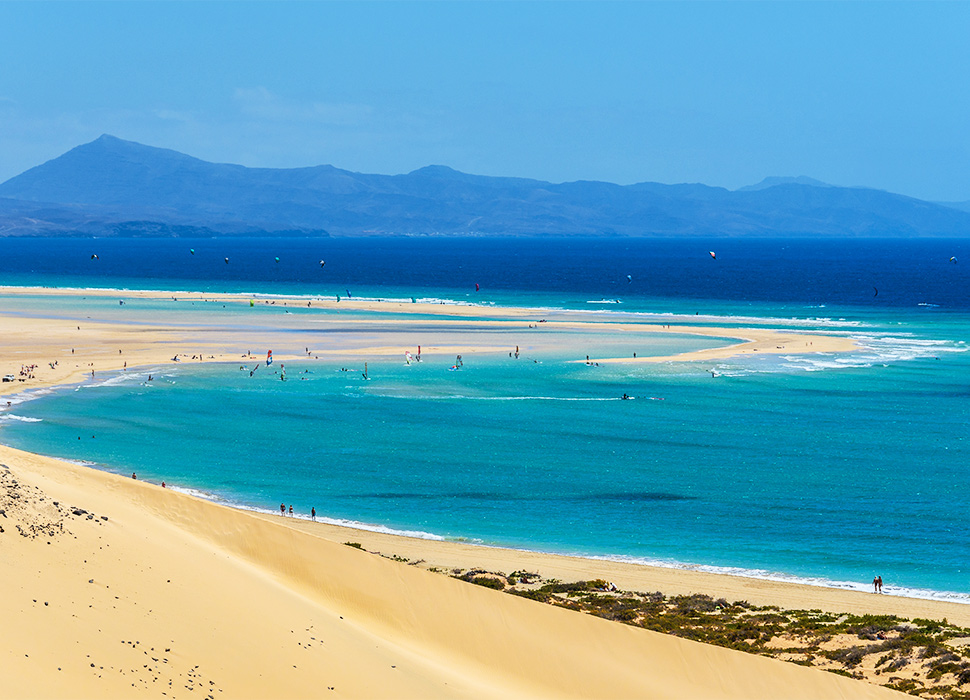 The lagoon on Sotavento / Image: 123rf

Technically five beaches lumped together – La Barca, Risco del Paso, Mirador, Los Canarios and Malnombre – the Playa de Sotavento is nine kilometres of exquisite white sandy excellence at the very south of Fuerteventura. It’s incredibly tidal too, such that when the tides are out you almost feel like the island doubles in size. There’s a lagoon that forms when that happens, which is a favourite for amateurs to come and practice the local pastimes of windsurfing and kitesurfing. Between all that wind, and the gorgeous mountain backdrop, we promise you’ll be blown away. 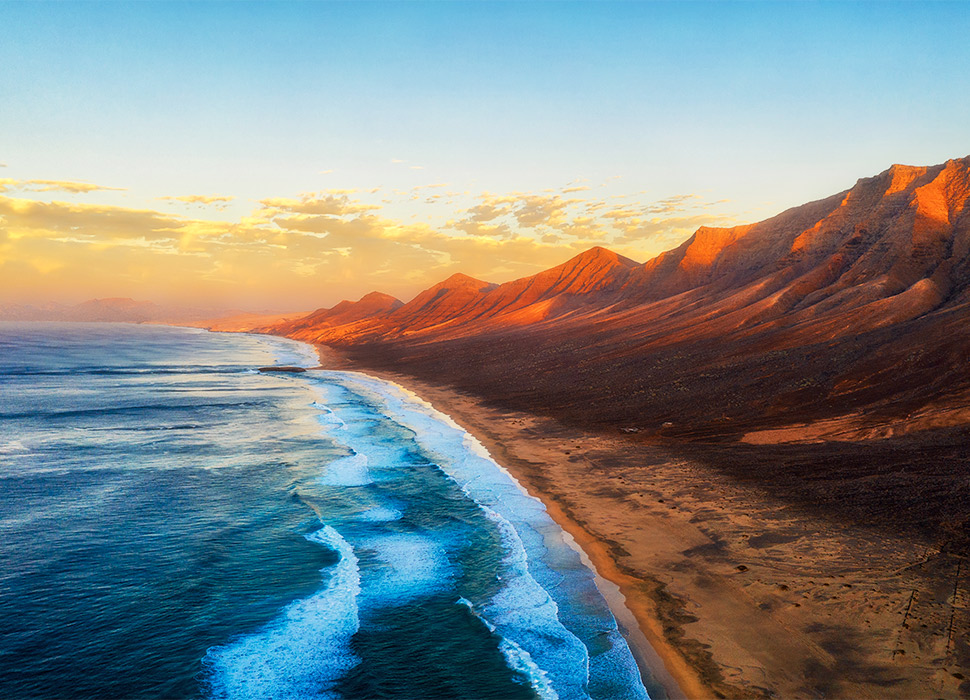 Cofete beach is one of the region's most radiant / Image: 123rf

The most spectacular beach in all of Fuerteventura – arguably the Canary Islands – takes a bit of getting to. The 20km road from Morro Jable swiftly degenerates into little more than a single-track dirt trail, so a 4x4 or a Jeep is probably a good idea if you’re driving. But when you make it to the Playa de Cofete you’ll have no regrets, as the unspoiled turquoise-hued Atlantic laps against the pristine sand, that rises inexorably up to the awe-inspiring Jandía mountains. 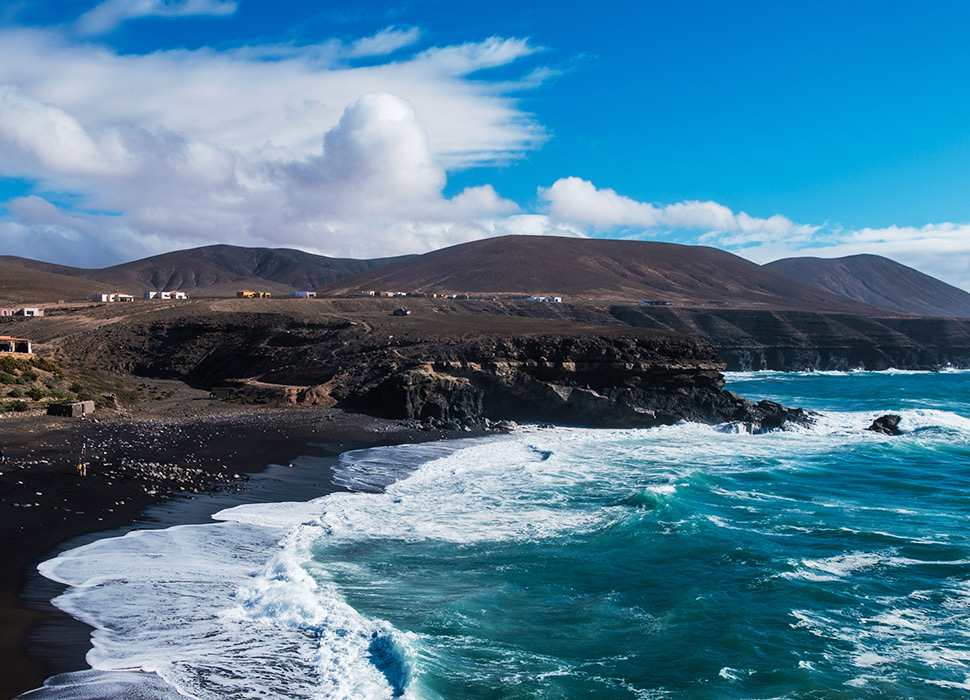 One of many pretty dark sandy stretches situated on Fuerteventura’s wild west coast, Ajuy and its environs are all about drama and spectacle. Formed of fine-grain volcanic sand, and set against the cinematic backdrop of swirling multi-hued sedimentary rocks, the beach forms part of a gnarly cove. Definitely give swimming in the sea here a miss, mind – the waves don’t muck about. But for a powerfully photogenic slice of life on the edge, Ajuy is a joy. 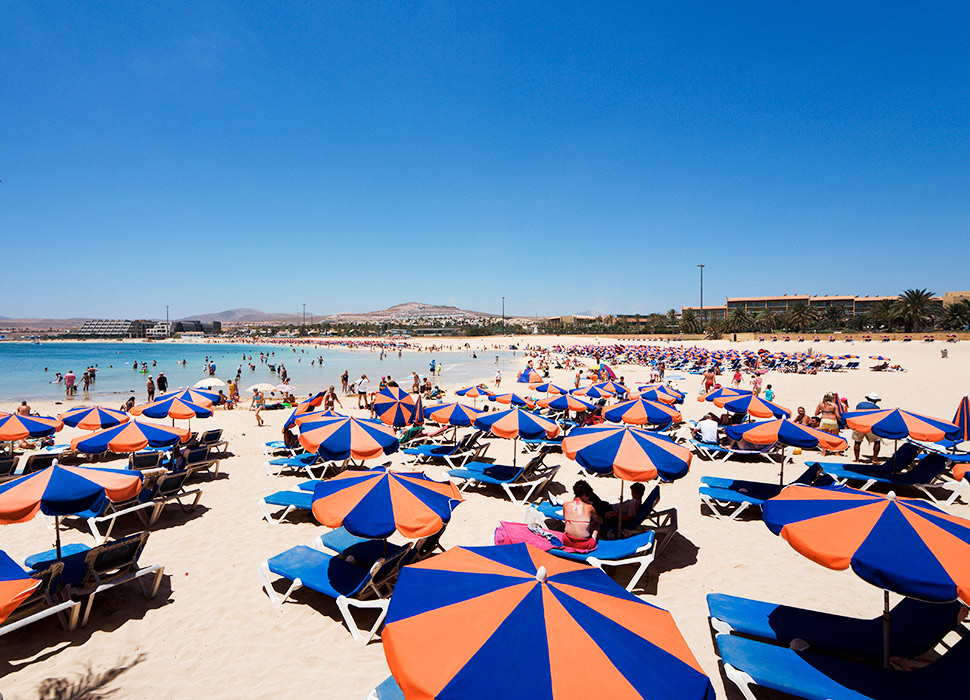 For an infinitely more tranquil, laid-back variety of beach-break energy, venture straight across the island to Playa del Castillo, the gently lapping waters of which are located in a protected bay by the sleepy resort of Caleta de Fuste. Named for an 18th century fort – that’s still standing – there’s loads going on in the water, from snorkelling to dipping with the local sea lions that love to poke their shiny faces about around the marina. It's very kid-friendly, if you’re a travelling family – if you’re not, consider yourself warned. 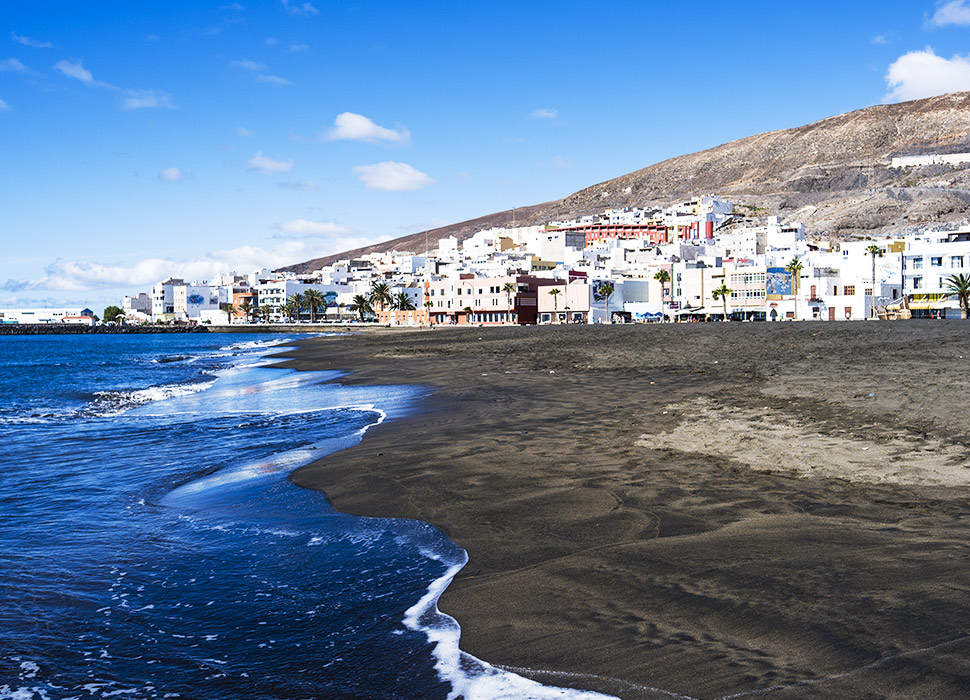 For something a little bit different, venture away from the superstar tourist playas and check out Gran Tarajal, a fine dark-sand beach in the town of the same name. As Fuerteventura’s second biggest town, there’s plenty going on to keep you amused, not least the fish restaurants supplied by all those handsome coloured boats that bob in and out or the nearby harbour. Be warned, the sand gets hot in direct sunlight, but the town shelters you from the most intense local winds. 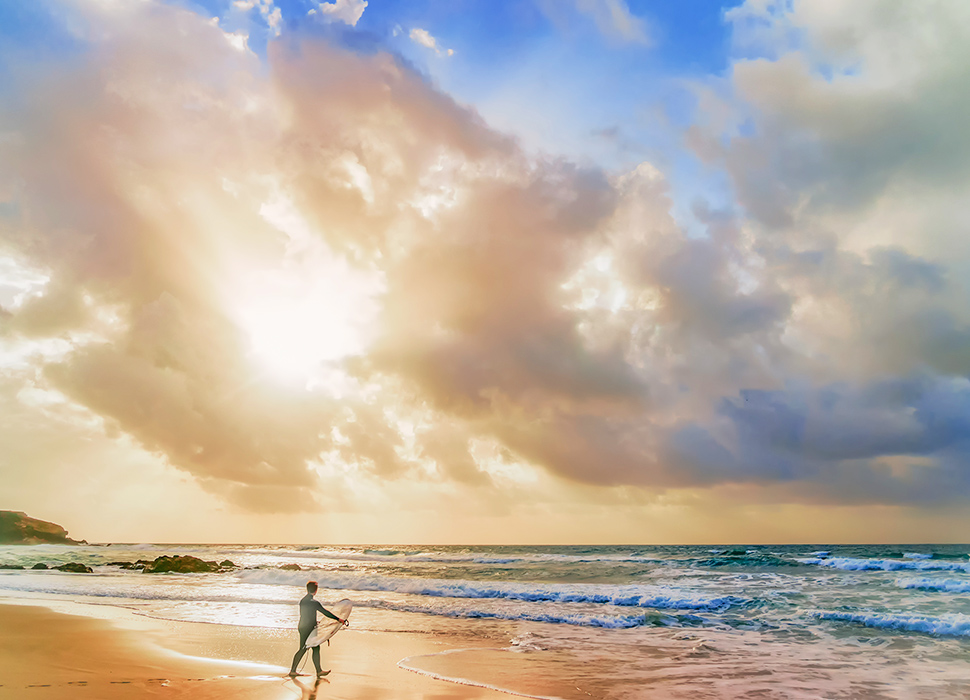 Proud of its status as the surfer’s paradise of the island’s west coast, chillaxed Playa del Viejo Rey and its adjacent conurbation of La Pared spurn the big hotels and busy vibe of nearby resorts. So it’s all about rugged nature, the keen wind, and easygoing fun among the waves. As well as all those groovy young types hanging ten, horse riding is also quite the thing here, with stables happy to lead you out on a friendly steed and indulge your own romantic seaside fantasy. 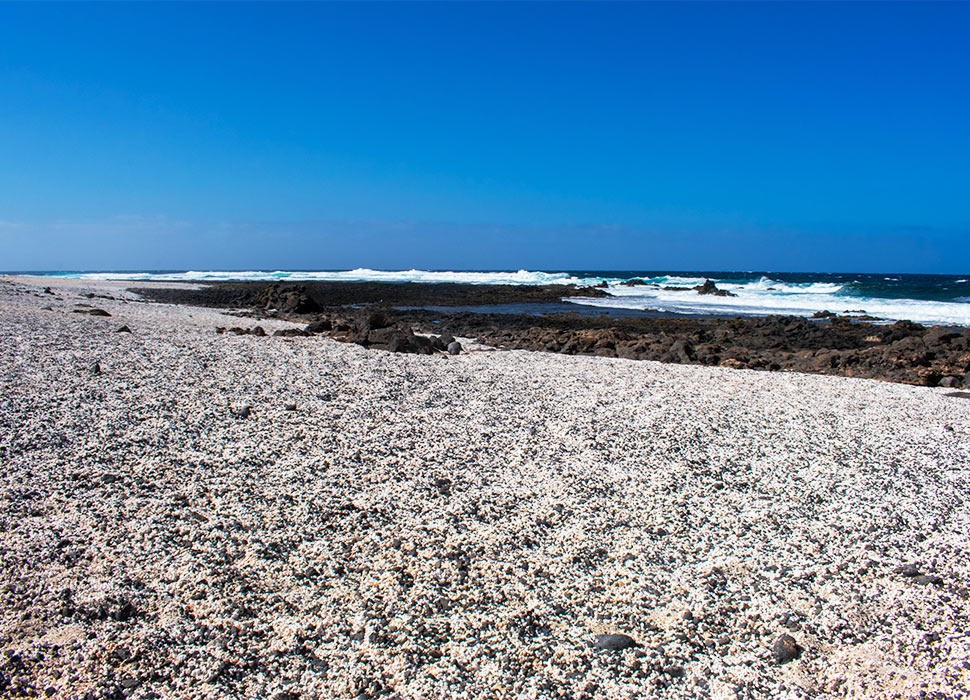 A sea of inedible but beautiful husks at the popcorn beach / Image: Adobe Stock

It’s definitely not the most comfortable beach to spread your towel on – but this stretch of northern Fuerteventuran shoreline certainly is photogenic, and more than deserving of its mad Insta-hype. Playa del Bajo de la Burra – aka, the 'popcorn beach' – gets its nickname from the countless husks of calcium carbonate that wash onto the shore after red algae die and harden a little way out to sea. It's well worth a journey, with air that’s salty, and views that are sweet. Just don't nick the pretty shells.

Kick back on Fuerteventura's black-sand beaches