The best things to do in Vienna

From homegrown wine to royally good chocolate cakes and the world's nicest ring road, Vienna has it all. Here are our picks of the Austrian capital

1. Get spun out on the Wiener Riesenrad 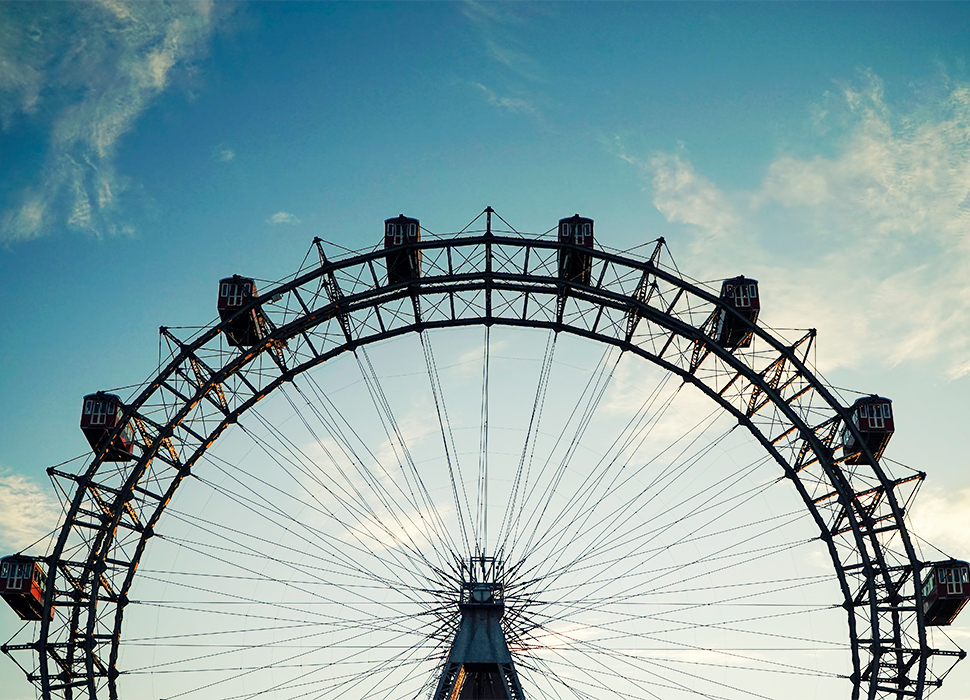 Austria’s elegant ferris wheel has actually been around (and around) for a long time. Erected in 1897, the wheel – situated at the entrance of the old-school Prater amusement park – holds 15 stately gondolas, and has provided a key backdrop a movies like The Third Man and the gritty Timothy Dalton Bond flick The Living Daylights. Over the years it’s seen its fair share of ups and downs, but there’s no lovelier vantage point to gaze out over Vienna.

2. Eat your greens at the Palmenhaus 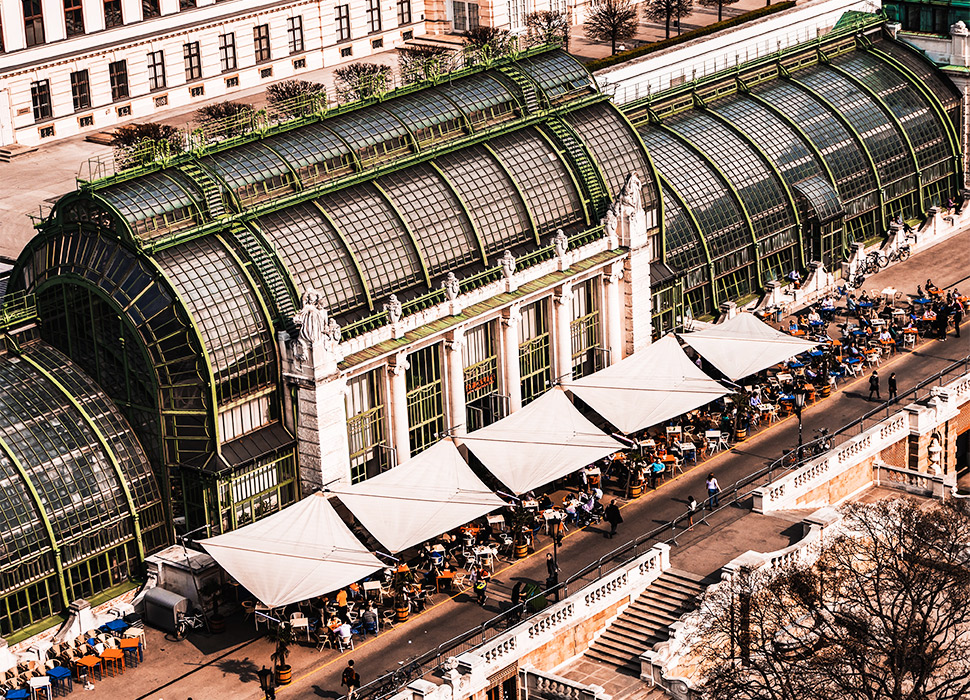 Eating dinner in a greenhouse might not sound like your idea of luxury. But this is no ordinary greenhouse. Originally laid out in 1822, with its colossal wrought-iron and glass roof put in place several decades later, Palmenhaus was originally built as place for local emperors to enjoy a bit of exotic flora. Now, amid many hundreds of dazzling plants – shout out to the 350-year-old olive tree – it’s also a posh restaurant, with upscale takes on local favourites like the classic schnitzel, and botanical cocktails. It’s a clear winner.

3. Leave your ego at the door of the Freud Museum 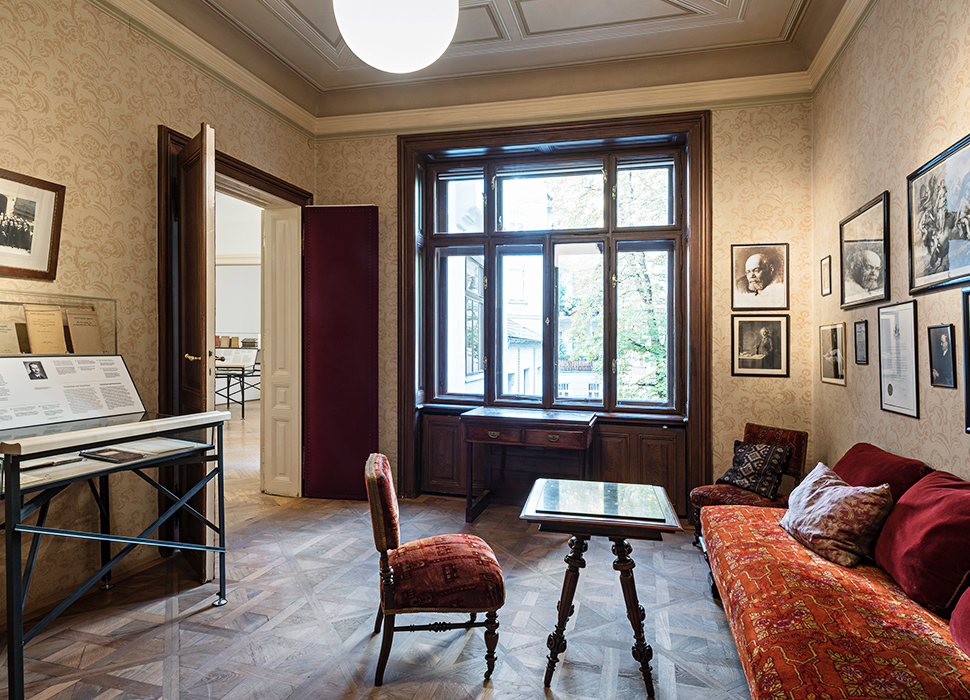 The father of psychoanalysis, Sigmund Freud, lived and worked in an apartment on Berggasse for nearly 50 years, until he was forced to flee by the Nazis in 1938. What remains – not long ago renovated and spruced up into a swish modern museum – offers a fascinating glimpse in the personal life of one of the 20th century’s undisputed academic greats, and a leading figure in the proud Viennese intellectual golden age. Some 35,000 research volumes are also here, among them priceless originals.

4. Kiss up to Klimt at the Belvedere Palace 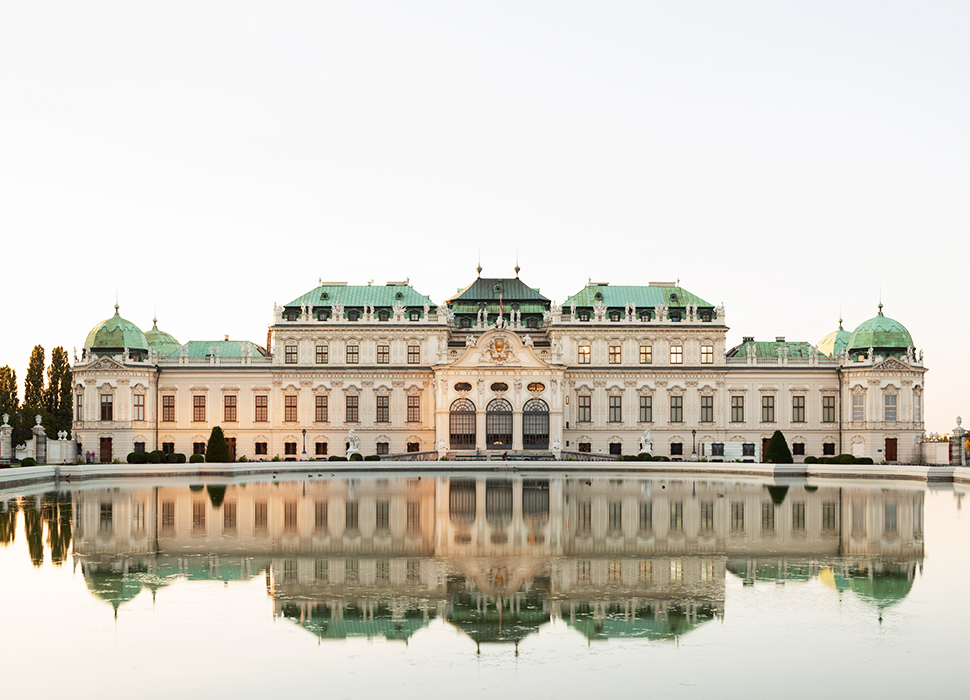 Local lad Gustav Klimt’s most famous work – a painting of a young couple sensuously making out in a meadow, adorned with twinkling gold leaf – forms the dramatic centrepiece of the collection of the artist’s work on display at Vienna’s uber-regal Upper Belvedere Palace. The Kiss is said by art historians to employ Byzantine mosaic techniques, and there’s even platinum in the shiny canvas. And while there’s certainly other pretty Klimt pieces here, this Kiss is indisputably first in the pecking order.

5. Sing when you’re winning at the Vienna State Opera 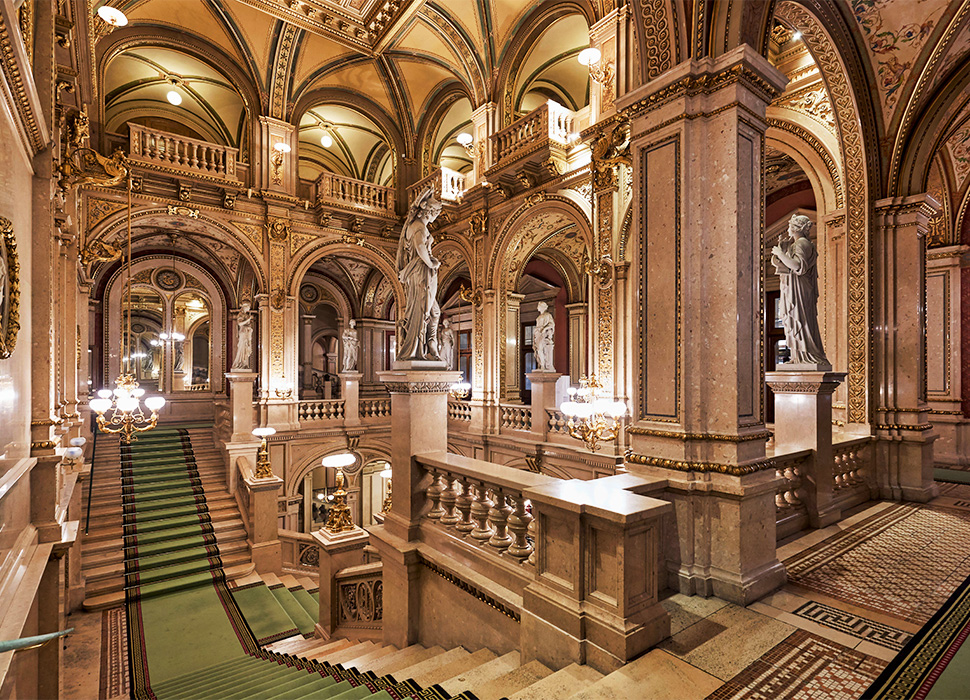 Vienna is a cool, progressive modern capital – but you just can’t ignore all the lovely old-fashioned stuff that made it great in the first place. Nowhere is this more true than at the state opera house. Set in a gigantic, grandiose neo-Renaissance pile of a building, the company here puts on the grandest and most ambitious opera and ballet performances around for rapt audiences all the year through. It's moving with the times: patrons can now get subtitles on a little screen for when they can’t figure out what on earth is going on.

6. Sup a cup of joe at Café Central 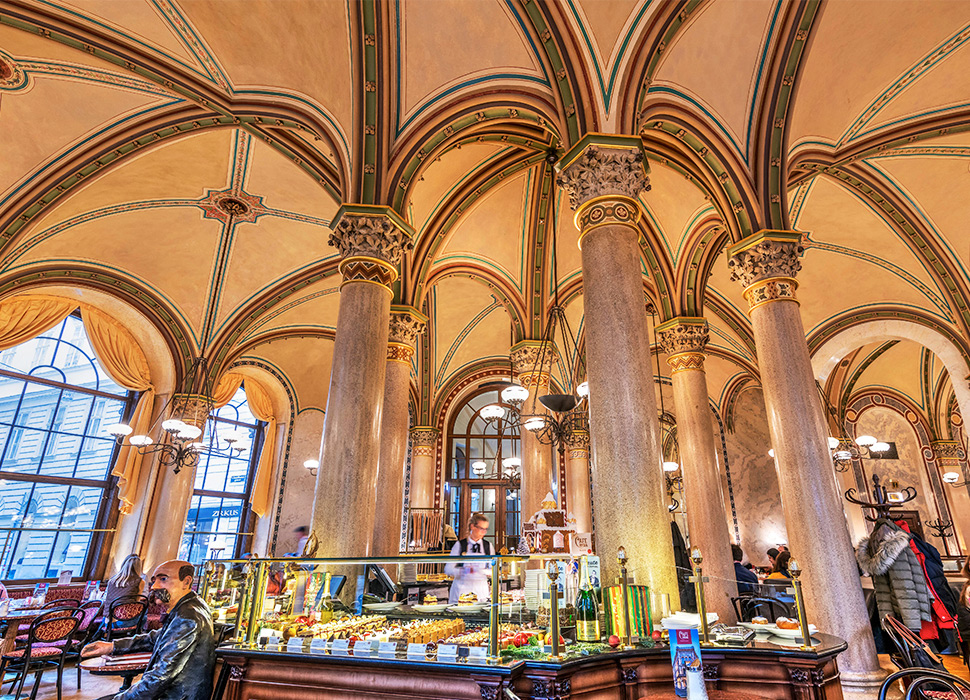 Austrians do love an over-the-top coffee shop experience – and the apex of their culture is to be experienced at Café Central, a late 19th-century ‘kaffeehaus’ set in a parquet-floored, Viennese-style palace. Intellectual big-hitters from Freud to Trotsky have taken their caffeine hit here, chasing them down with indulgent sugary delights like apfelstrudel or feather-light pancakes with perfect jams. You'll have to queue a bit, but it's a real treat – there's no standing awkwardly around waiting for a barista to mispronounce your name here. 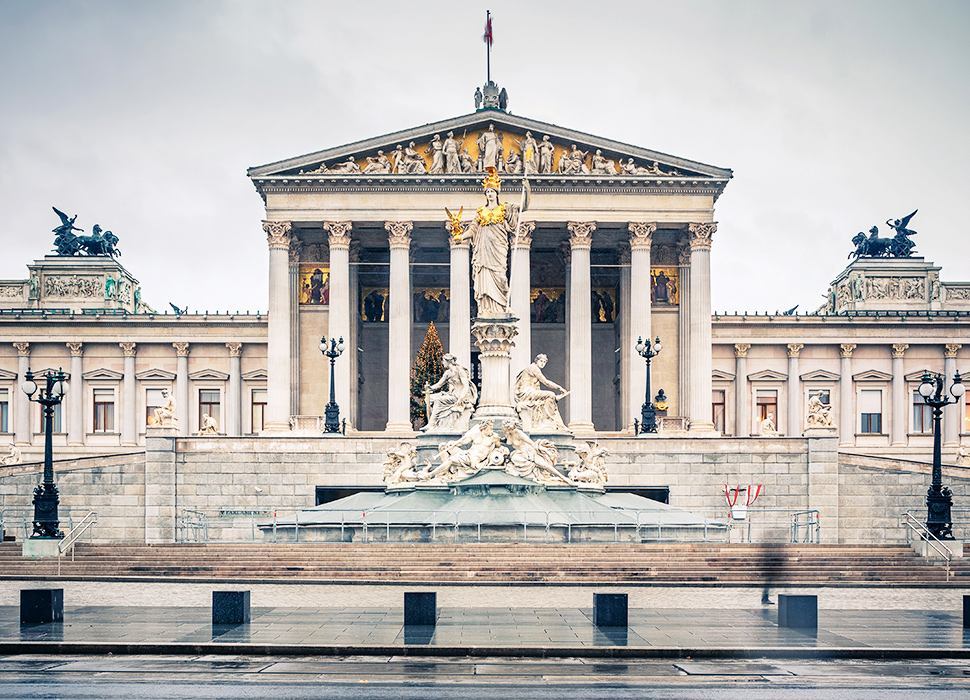 A view of the Austrian parliament from the Ringstrasse / Image : Getty Images

Trust the Viennese to take the humdrum concept of a ‘ring road’ and make it swish. The Ringstrasse was first set out in 1857, commissioned by emperor Franz Joseph I as a means of showing off the best bits of his mighty Habsburg empire. In a relatively leisurely 90-minute hike, thanks to his grand vision, you can clap eyes on the town hall, the Austrian parliament, museums of art history, natural history and fine art, the gorgeous roses of the Burggarten, a nice statue of Strauss, the state opera house and the university.

8. Peace out at Karlskirche 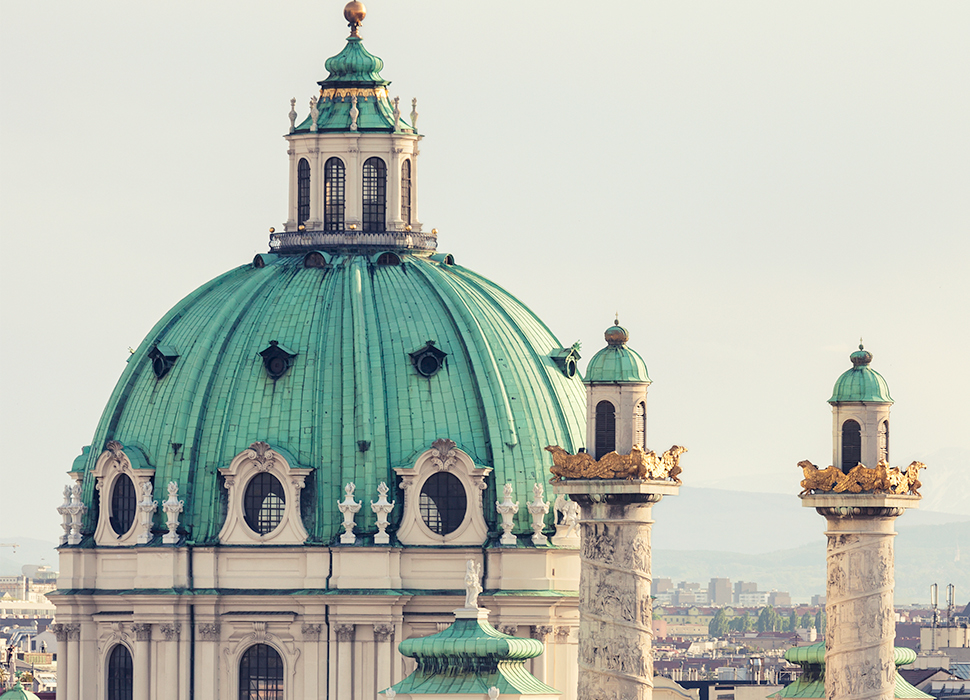 Back in the early 18th century a vicious outbreak of plague looked set to ravage Vienna. Holy Roman Emperor Charles IV made a vow to construct a church in honour of St Carlo Borromeo – a noted healer – if the city was spared. It was, more or less, and the result is this fantastical cocktail of Baroque, Renaissance and Byzantine architectural styles. A sea of gold Corinthian capitals and fine-art panelwork, the church is a divine expression of craftsmanship that you would have hoped would see the almighty go easy on the plagues for a bit. Didn't quite work out that way, did it…

9. Drink in the views from Weingut Cobenzl 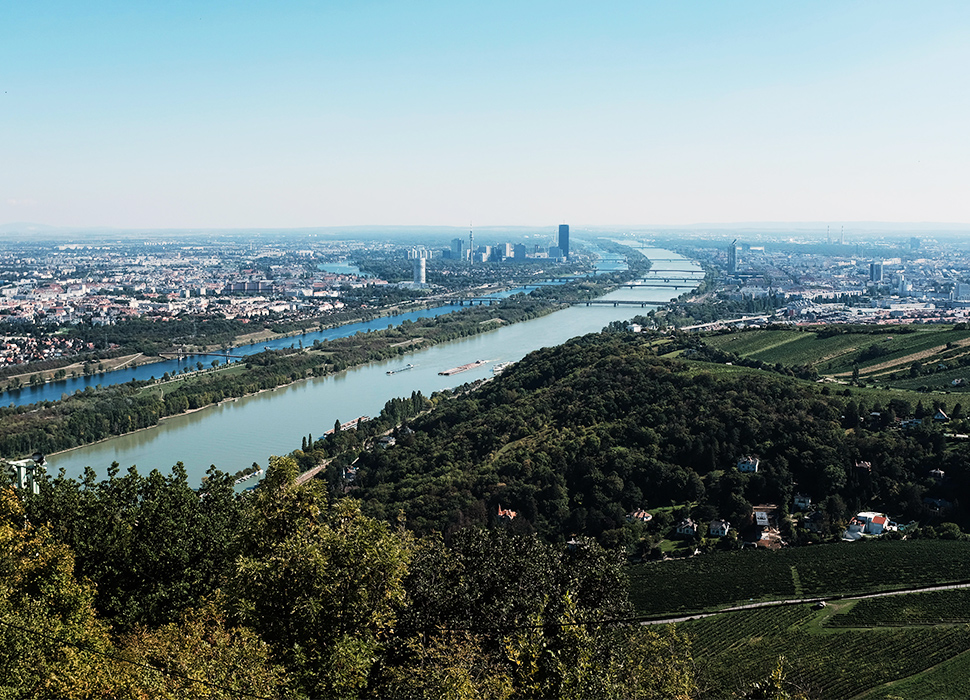 Take in the city at one of Vienna's vine shrines / Image: Alamy

As befits a city that knows how to appreciate the finer things in life, Vienna has a real thing for wine. Indeed, there’s some 700 hectares of working vineyard within the city limits, with many downtown bars offering bottles from their very own plots tucked away in the surrounding hills. The toast of the town is probably Weingut Cobenzl, where you can take a toper’s tour of the facilities, or just chill out with a trademark crisp Wiener gemischter satz and enjoy heady views over the ancient city below.

10. Scoff sachertorte in the home of the original 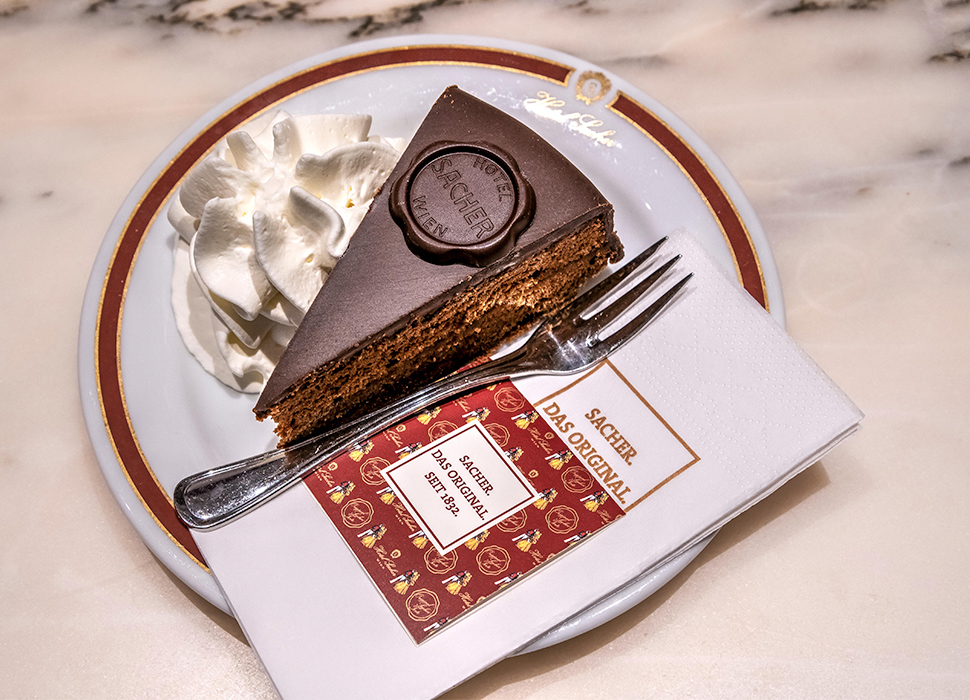 The undisputed champion of Viennese sweet treats is the sachertorte – a rich, dark chocolate cake with a perfect layer of apricot jam in the middle and a mirror-smooth glaze on top. This scrumptious dessert was first cooked up by one Franz Sacher in 1832, when commissioned to come up with something a bit spesh for an event hosted by Prince Klemens von Metternich and his dining chums. There's nowhere better to try one for yourself than at the legally acknowledged home of the sachertorte, Café Sacher – the house logo of which is embossed from the top of each slice.