The 10 best ski resorts in Austria

The landlocked home of Mozart and wiener schnitzel also happens to be one of the finest snowsports countries in Europe. From city-accessible slopes to lofty villages, here are its finest resorts

If there’s one thing Austria has every right to be proud of it’s its ski resorts. Forget the Sound of Music, Mozart and Swarovski (well, don't forget them completely), it’s the snowy valleys covered with slopes, high-tech ski lifts and raucous umbrella bars that we’re here for.

Forget what Julie Andrews says, the only reason we want to climb every mountain is to ski down the other side. And to help you choose which one, here’s our pick of the 10 best ski resorts in Austria.

A quick shoop-shoop and you'll be over the border in no time – these are the best ski resorts in Switzerland.

Done on the slopes? Then park yourself in one of the finest restaurants in Salzburg. 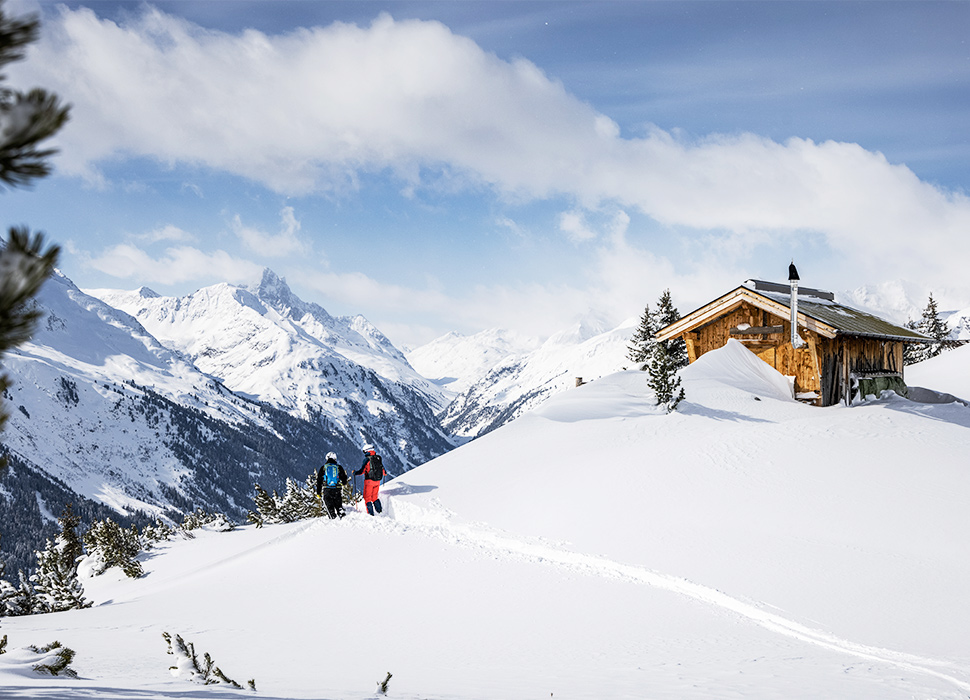 St Anton – well, not all of it / Image: © Tourismusverband St. Anton am Arlberg / Patrick Bätz

It’s an obvious choice, but no best of list would be complete without the legendary St Anton. It’s the winning combination of challenging slopes to boost the ego and party atmosphere town to celebrate the snow wins that earns over so many loyal fans. Whether you’re taking the epic backcountry off-piste routes from the top of the Valluga, chilling on the cruising reds and blues at Rendl or clocking the miles exploring the extensive Ski Arlberg region through to neighbouring Lech and Zürs, St Anton is hard to beat. 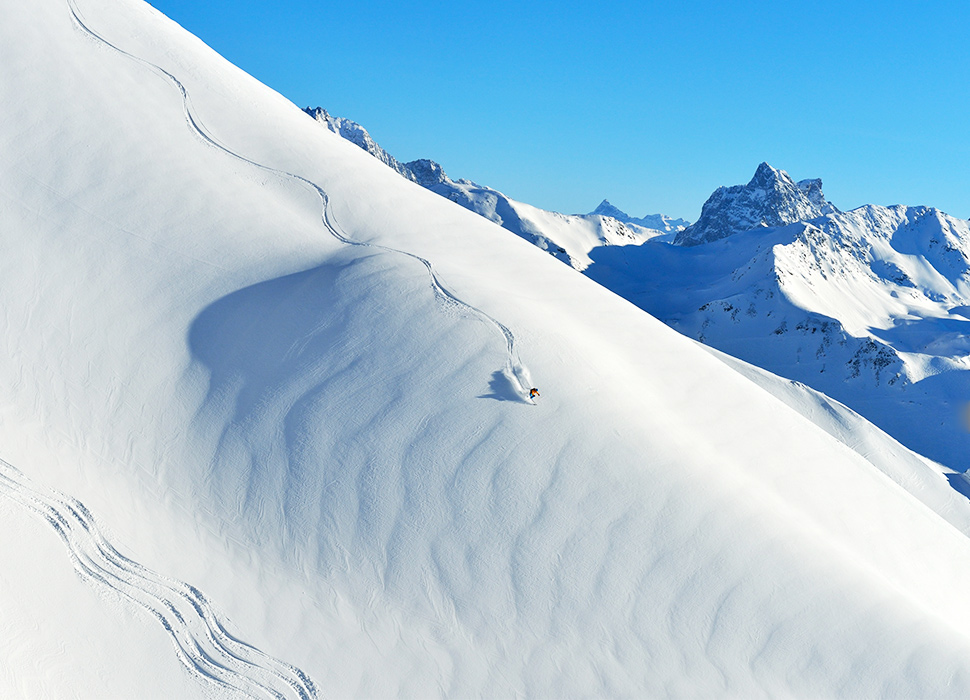 Wonderfully chic, Lech is a classy village of effortless luxury, complemented by the even more exclusive neighbouring village of Zürs and the ski-in/ski-out hamlet of Oberlech. The skiing is delightful, a flattering mix of long cruising runs and more demanding pistes across the bigger Ski Arlberg region it shares with St Anton, plus some really accessible nursery slopes to practise on. Most of the accommodation is in family-run hotels, where the service is effortless, the spa is extensive and everything is just so darn well thought out. 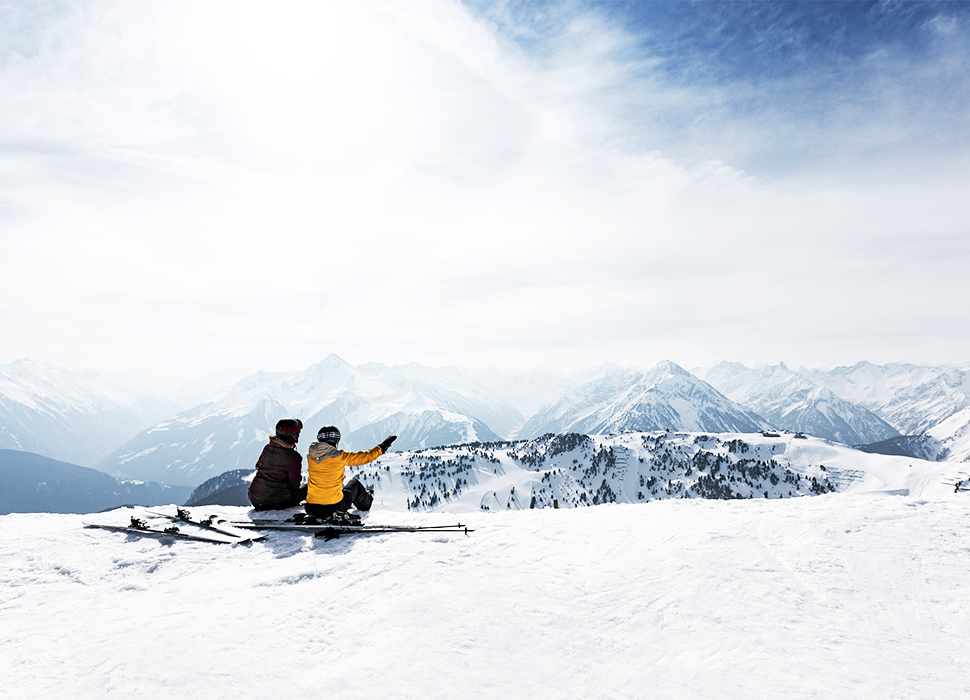 On the eye out for runs above Mayrhofen / Image: © Archiv TVB Mayrhofen, W9Studios

Making sure people have a good holiday is a way of life in Mayrhofen. The resort has been welcoming guests for over 100 years and despite its low altitude at 630m, the busy village has gained a reputation for snow-sure slopes that sit largely above the treeline, beloved by both intermediates and freestyle skiers and snowboarders. What makes Maryhofen so popular is its ability to be all things to all people. Want to party from lunchtime? No problem – there are tons of mountain huts pumping out the tunes. Want a fun family holiday? Head to the quieter Ahorn area. 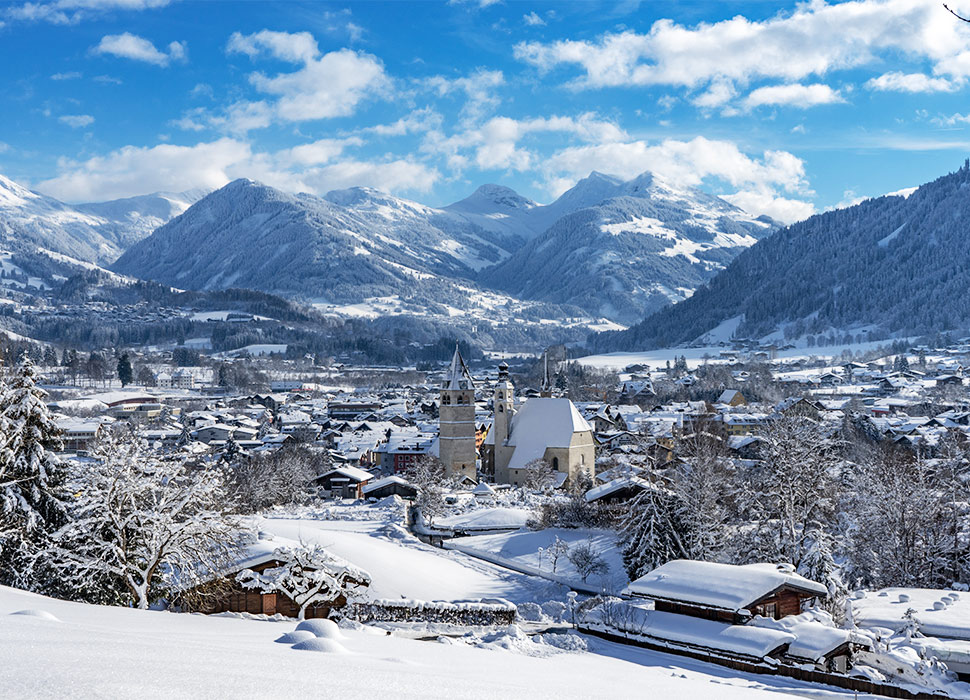 Most well-known for the Hahnenkamm, the scariest and most technically demanding course on the World Cup downhill race circuit, many visitors to Kitzbühel are surprised to find a Medieval town at its base that wouldn’t look out of place in a Disney film. The picture-perfect Tyrolean setting continues on the slopes – Kitzbühel has 233km of pistes spread over three areas and while none are as death-defying as the Streif run on the Hahnenkamm, the terrain is best suited to strong intermediates and experts. 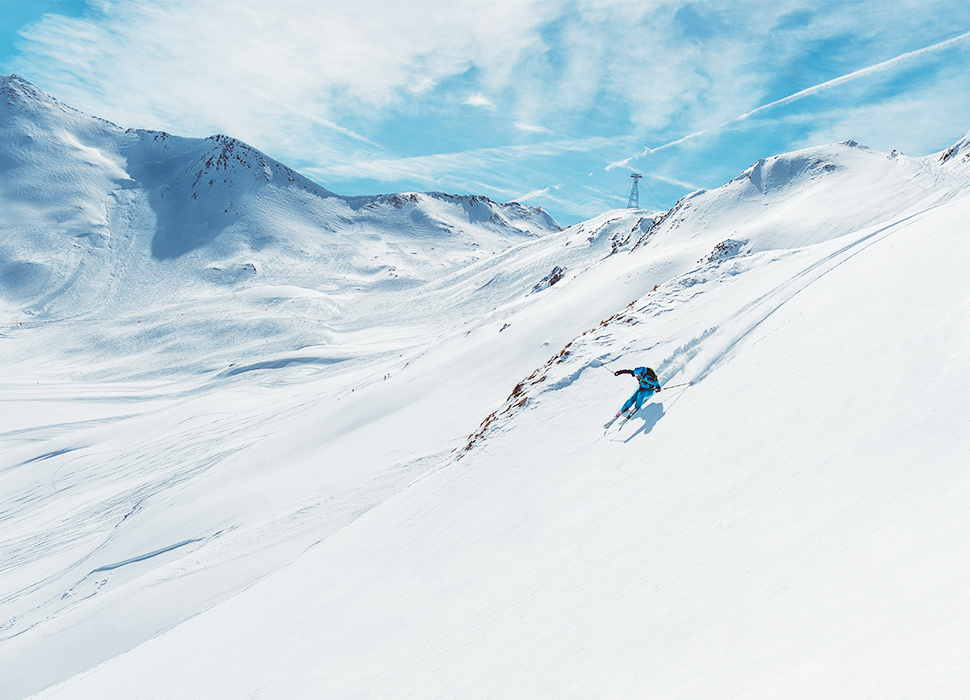 A spot of exhilarating free-riding above Ischgl / Image: ©TVB Paznaun-Ischgl

Ischgl has made a name for itself with the legendary top-of-the-mountain concerts that have historically kicked off and closed each winter season. The resort has hosted everyone from Elton John and Kylie to Bob Dylan and the Beach Boys – but don’t let these huge names overshadow the resort, as it’s a Tyrolean superstar in its own right. It’s fabulous for intermediates who like to clock up the miles – Ischgl shares 239km of high, sunny slopes with neighbouring Samnaun in Switzerland – before dancing the night away on table-tops in the resort’s many bars and clubs. 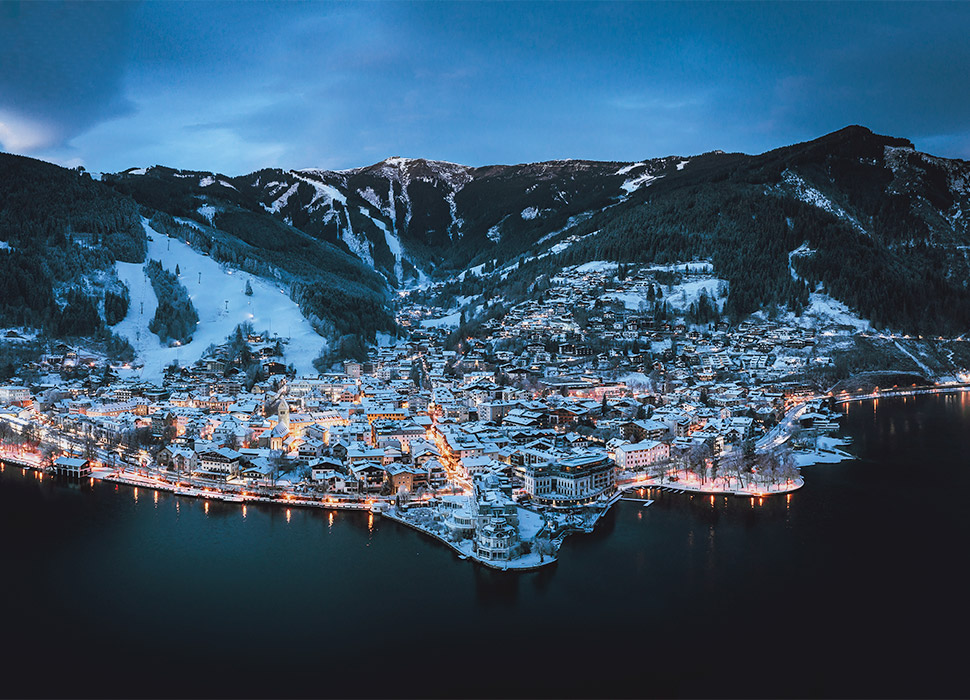 The Schmittenhöhe looms over Zell am See / Image: © Zell am See-Kaprun Tourismus

Zell am See is a special place – a proper town rather than a small Alpine village, it’s squeezed between the large Zell lake and the mountains, and has a very cute Medieval centre with narrow streets and lots of places to eat and drink with the locals. Zell’s slopes cover 77km on the Schmittenhöhe mountain, and suit everyone from beginners to experts. A short bus ride away is the neighbouring resort of Kaprun with terrain stretching up to the Kitzsteinhorn glacier, while in the opposite direction a new gondola connects to the vast intermediate haven of Saalbach. 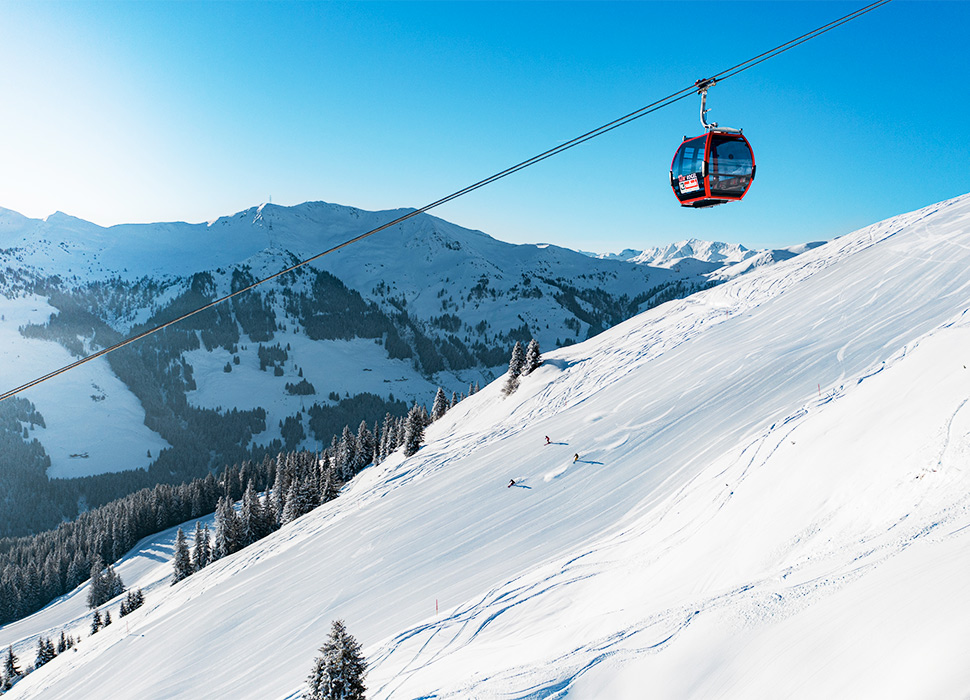 A quiet day on the pistes before the partying begins / Image: © saalbach.com, TVB Saalbach, Sebastian Marko

Saalbach markets itself as a 'Skicircus', and we like to imagine trapeze artists and clowns romping around its 270km of pistes. Linked to the villages of Hinterglemm, Leogang and Fieberbrunn, it’s a great destination for intermediates who like to travel around different valleys, and it’s all connected by one of the fanciest lift systems in the Alps – no rusty rope tows here. Saalbach is the liveliest of the villages and the partying goes from early afternoon through to the small hours. Maybe it’s more like a circus than we thought. 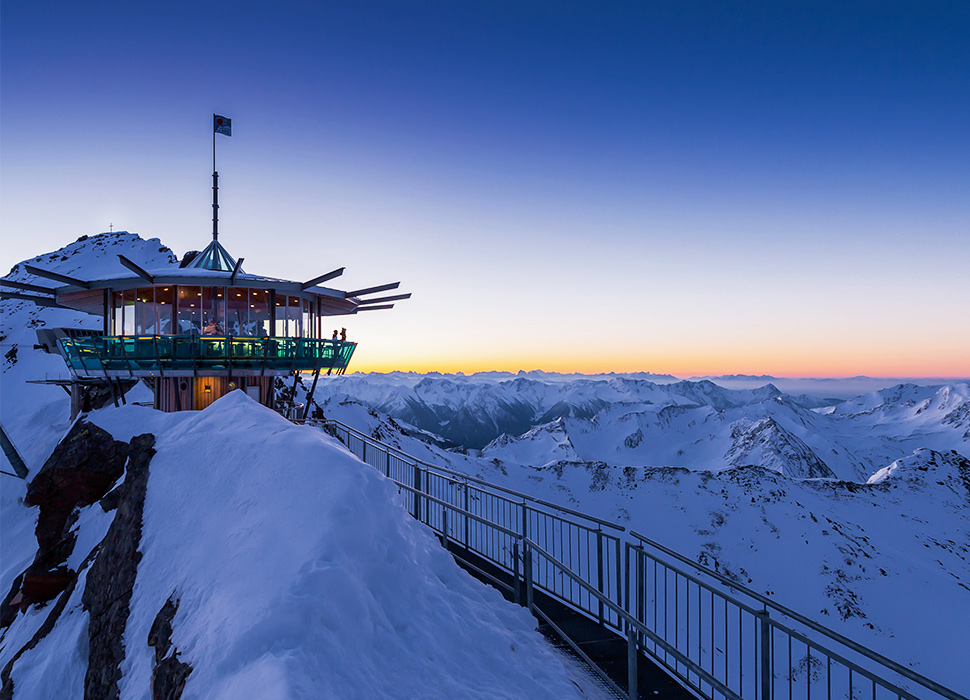 Much loved because of its altitude, the village of Obergurgl sits at 1,930m and its slopes link with Hochgurgl, where the glacier tops out at 3,080m. All these giddy heights make for a very snow-sure destination, and a long season that typically lasts from mid-November to early May. A small, traditional village with 112km of slopes most suited to beginners and early intermediates, it’s a huge hit with families, and benefits from being part of the Ötztal Super Skipass region, which includes swish Sölden and totals 356km of pistes. 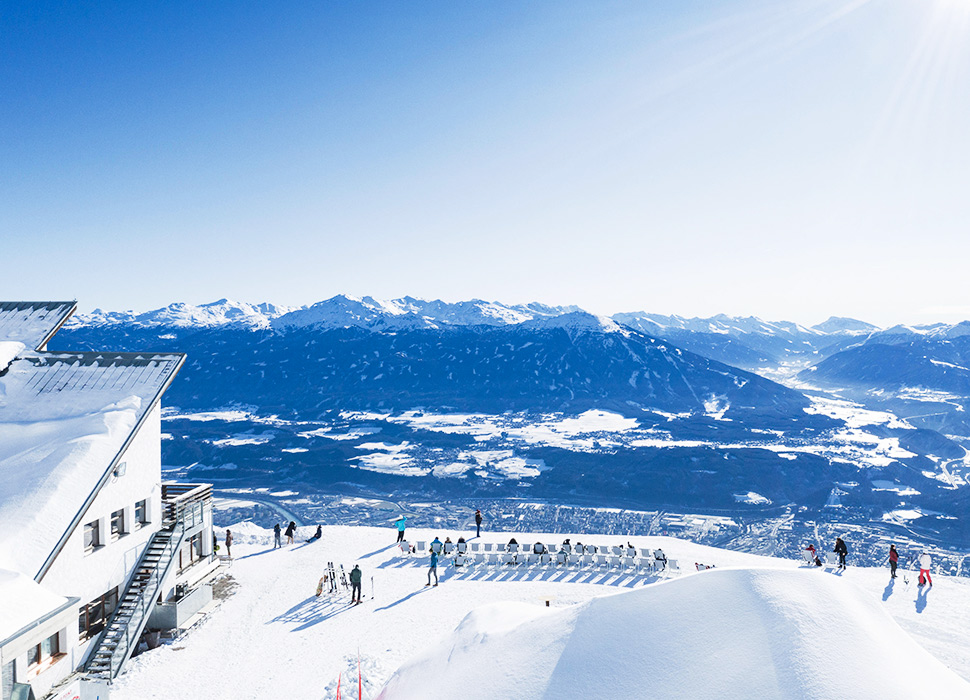 Innsbruck isn’t your typical ski resort. It’s a fully fledged city – full of life, history and people that happens to be surrounded by some huge snow-covered mountains. Stay in the centre and take your pick from 13 different ski areas all reached within an hour by complimentary ski bus. Nordkette is the closest, accessed by funicular from the centre, with steep slopes and good freeride; Axamer Lizum hosted the 1964 and 1976 Winter Olympic ski races and is great for adventurous intermediates. And with 11 others to choose from, there’s something for everyone else too. 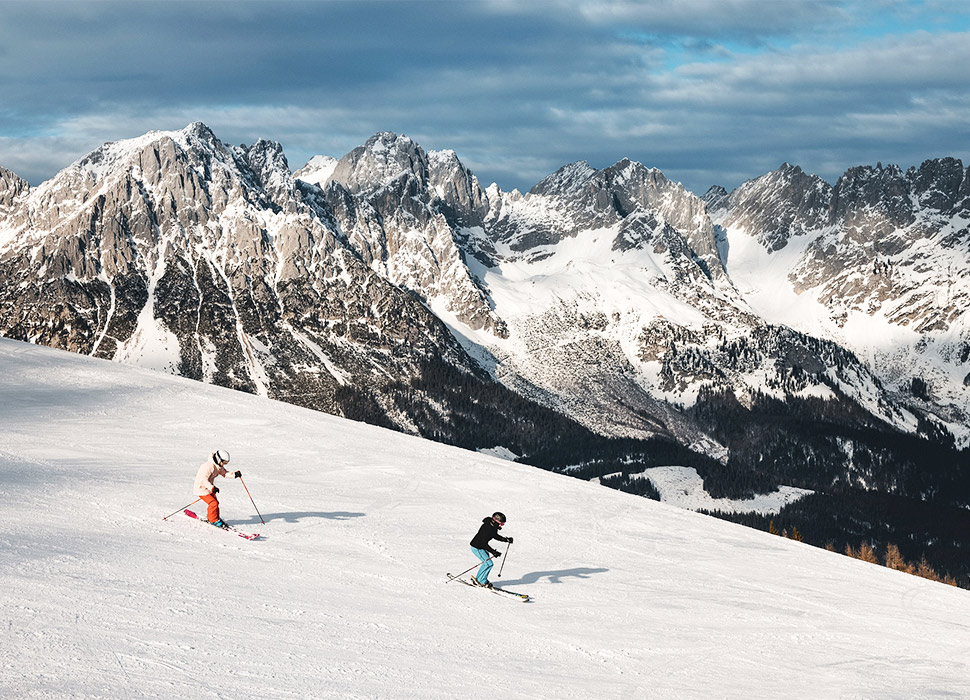 One of a dozen resorts that make up the Tyrolean SkiWelt region, Söll is our go-to choice for its rare mix of budget accommodation, and miles and miles of slopes. The SkiWelt, with 284km of pistes, is a total dream for intermediates, then when (if) you exhaust those, there’s another 230km of terrain accessed through Westendorf and Kirchberg to Kitzbühel in the opposite direction. Söll used to have a rep for boozy nights out, but the traditional village has increasing family appeal now, and everyone seems to rub along together quite nicely.