The best things to do in Salzburg

An atmosphere of refinement and delicacy scents the very alpine air of Mozart’s hometown. Here are Salzburg's highlights

If you're heading to Austria, check out our travel guide to Vienna, including the best things to do and the best restaurants in the capital. 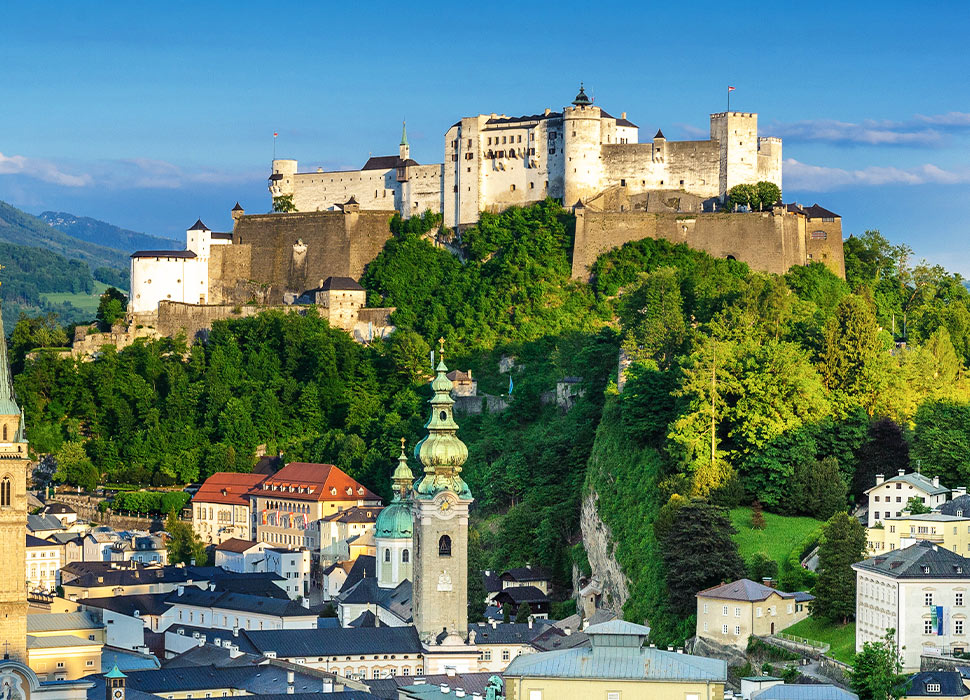 The enticing bone-white edifice of Hohensalzburg Fortress dominates the skyline for miles around, but has never been conquered despite a chequered history going back nearly a thousand years. Nowadays it’s a sprawling museum. But for the ultimate in high living, book a table for dinner at its upscale restaurant overlooking Salzburg’s dainty baroque rooftops, as elite musicians play timeless hits by local lad Wolfgang Amadeus. The fortress is accessible by a funicular that opened in 1892 (it’s also seen its fair share of ups and downs).

2. Nibble on a nockerl 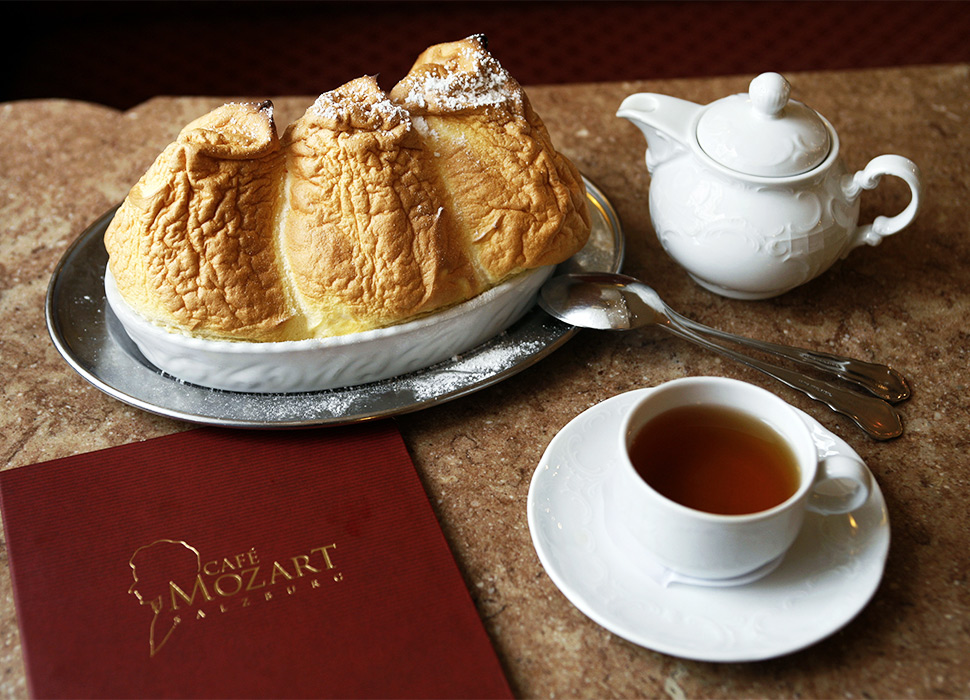 "As sweet as love, and tender as a kiss," wrote the Austrian composer Fred Raymond of the inimitable nockerl – Salzburg’s local take on the sweet soufflé, supposedly modelled on the shape of the surrounding Alpine peaks, capped off with a picturesque snowy dusting of sugar. For a deliciously trad version, order one after wolfing down your classic schnitzel at St Peter Stiftskulinarium (Sankt-Peter-Bezirk) or Café Mozart (22 Getreidegasse). Hotel Elefant’s (4 Getreidegasse 22) gooey golden nockerl, with lashings of cream on a bed of plump raspberries, is equally unforgettable.

3. Pull some strings at the Marionette Theatre 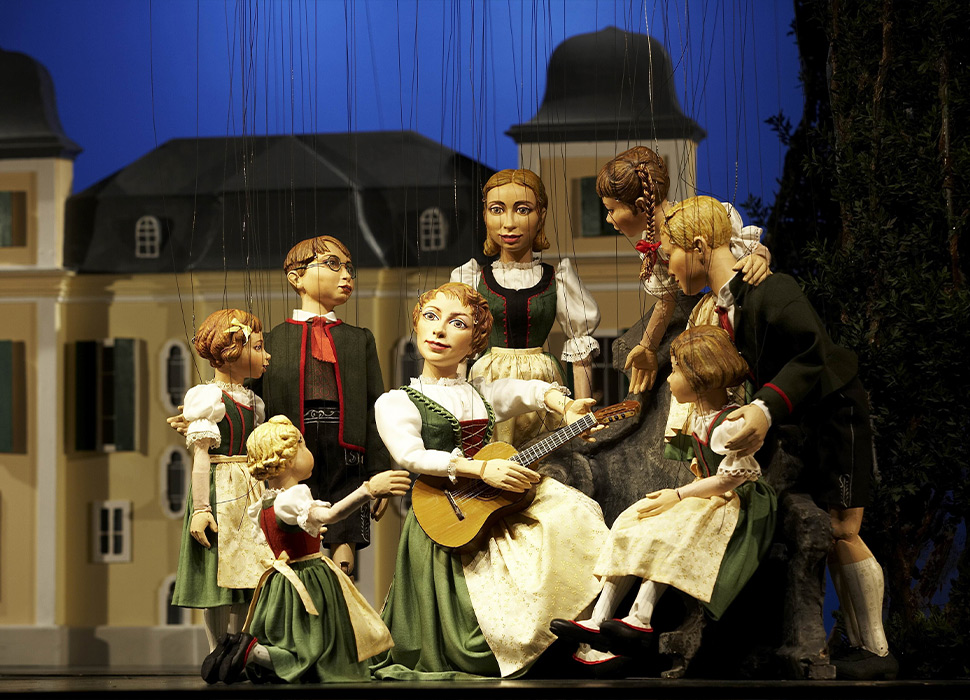 Acknowledged by UNESCO as part of Austria's intangible cultural heritage, Salzburg’s Marionette Theatre was originally the passion project of one Anton Aicher, who in 1913 decided to put on a strings-attached performance of Mozart’s comic opera Bastien und Bastienne. Over a century later his puppet company is still delighting audiences of all ages with totally wooden performances of The Magic Flute, The Barber Of Seville, The Nutcracker and (everybody’s sneaky favourite) The Sound Of Music.

4. Take a hike on Untersberg 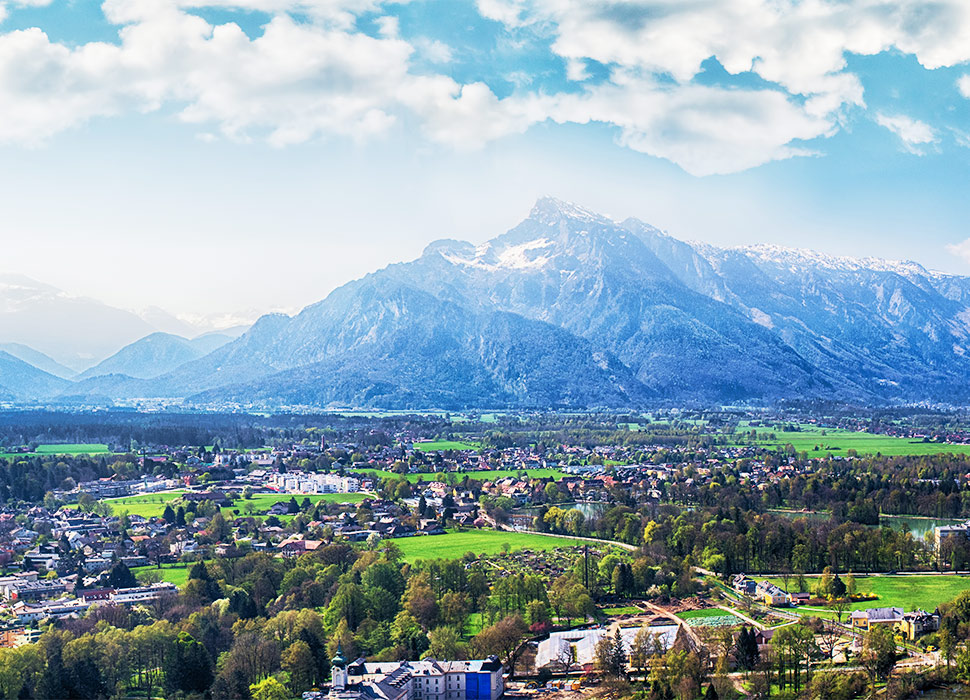 This magisterial super-massif – home to the 1,972-metre peak of Berchtesgadener Hochthron and accessible by a handy cable car from the St Leonhard district – has beguiled both locals and travellers since time immemorial. It’s steeped in legend. Some say wild women lurk in its wooded valleys and gorges. Eighth-century emperor Charlemagne, the so-called father of Europe, apparently still resides somewhere inside the Untersberg waiting for his cue to rise up and smite the antichrist. Tall tales aside, it’s a lush place to go strolling among the wildflowers.

5. Grab a brew at Augustiner Bräustübl 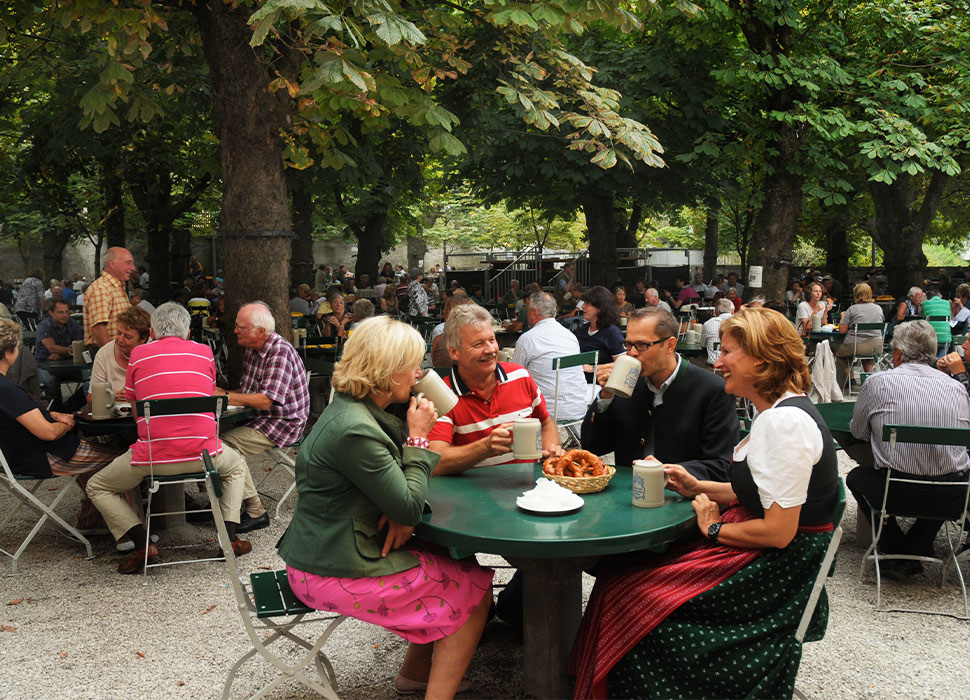 Augustiner's is less a beer garden than a sprawling estate / Image: ©Tourismus Salzburg

Austria’s biggest beer hall has been doling out great foamy steins of amber glory since 1621, and its handsome vaulted ceilings still echo with beery laughter and free-flowing chit chat. Run by monks, Augustiner Bräustübl even has its own indoor food market where you can soak up your brew with salty pretzels and savoury pork belly. For best results, bag a table under the spreading chestnut trees in the 1,400-seater beer garden and settle in for a truly historic afternoon on the lash.

6. Take a fresh look at the Museum der Moderne 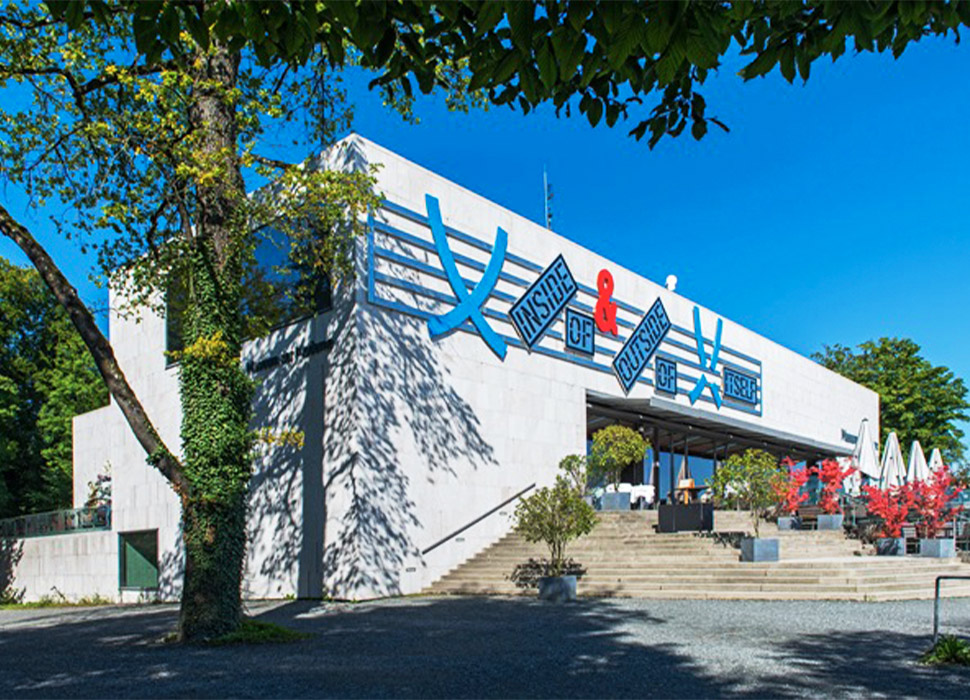 There’s more to this city than the quaint and the old-school. The Museum der Moderne is a thoroughly contemporary affair, showcasing great local and international paintings, sculpture and installations. The institution’s Mönchsberg building alone is worth the journey, set on a high cliffside, clad in marble quarried from just up the road at Untersberg, and attached to a gloriously kitsch 19th-century water tower. Perched 60m above the city, it proves modern art has real prominence here.

7. Immerse yourself at Haus der Natur 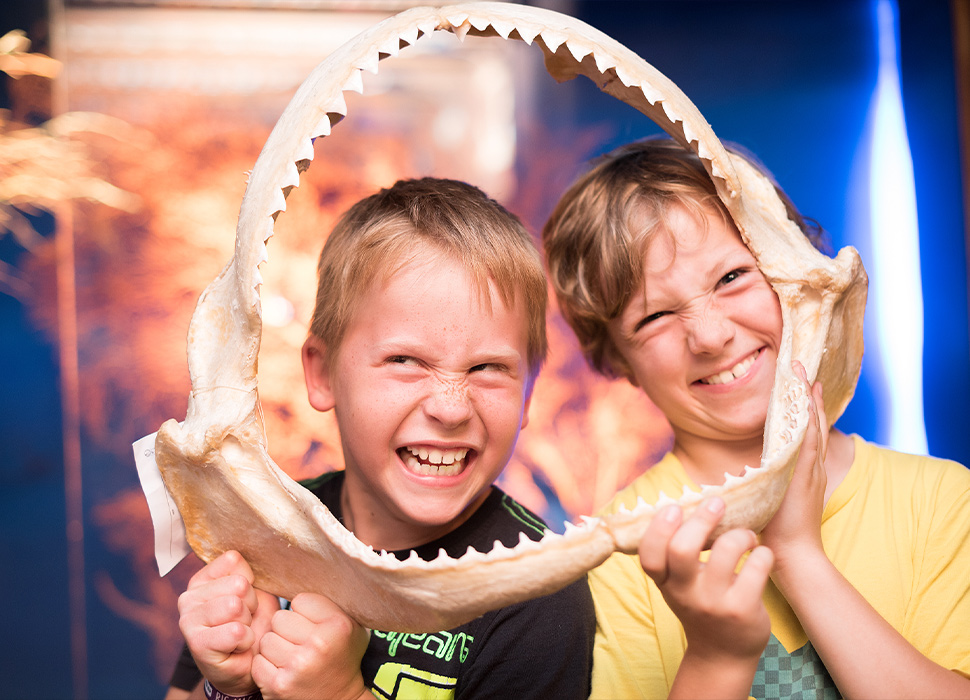 A fine place to get your teeth into the natural world / Image: HdN - Simmerstatter Photography

The sheer scope of Haus der Natur is incredible. Sure, it’s a natural history collection at heart, with all the usual dinosaur bones and model sharks. But there’s also a very good room covering the planets and cosmos. And a full-on aquarium with octopuses, piranhas and actual sharks. And a reptile zoo, with alligators and gila monsters. If that's not enough, there's also a science museum, packed with interactive experiments and eye-opening exhibits on renewable technologies. There’s even a whole bit on the physics of Mozart. And a very respectable café – if you can find the time.

8. Baroque out in the Old Town 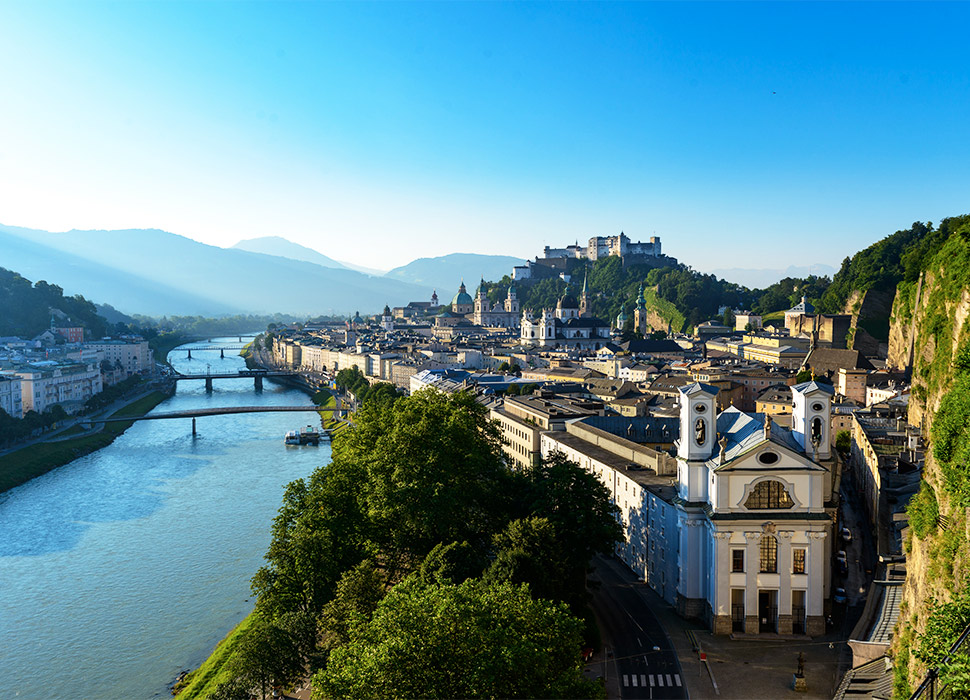 Salzburg’s old town – the ‘Altstadt’, in German – is a shining example of beatific baroque architecture. But what does that mean? In short: fancy domes, tall windows and pretty arcades, the kind of stuff that was all the rage back in Mozart’s day. He grew up here, in fact, and you can just picture the little periwigged prodigy skipping along the cobbles to his piano lessons past the fairytale grandeur of the Old Town Hall Clock (2 Rudolfskai). Even if you’re not an architecture fan, it’s hard not to be swept up in the romance of it all.

9. Get your Von Trapp on 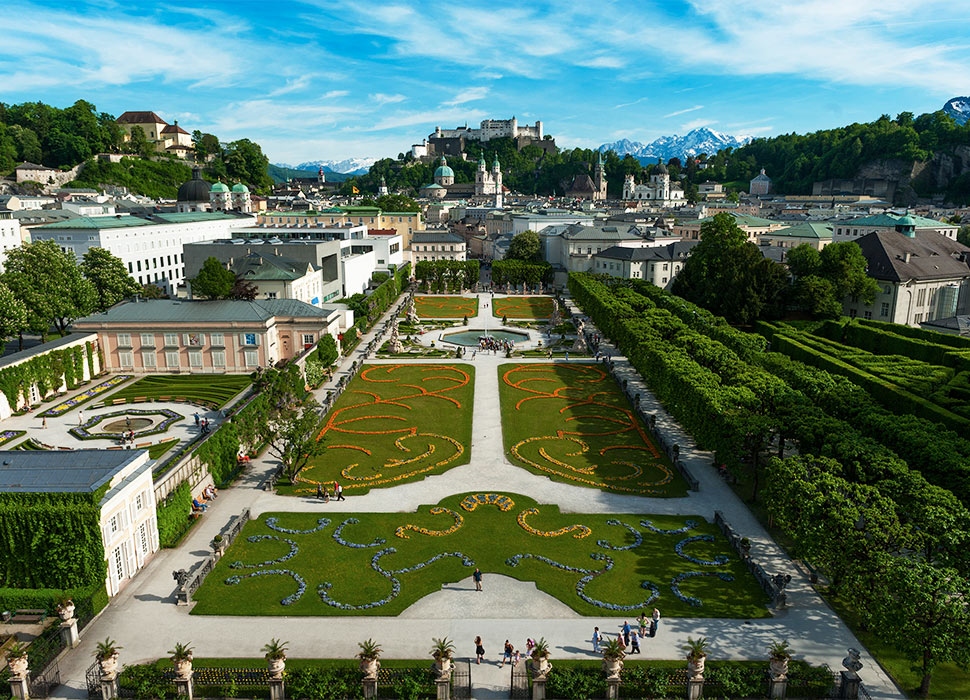 Fans of The Sound Of Music – literally everybody, surely? – can re-enact scenes from the 1965 feel-good classic at an assortment of locations around the city. ‘Do, Re, Mi’ (doe, a deer, a female deer...) was filmed at a few still-recognisable spots in the Mirabell Palace Gardens (Mirabellplatz). Julie Andrews belted out ‘I Have Confidence’ twirling across Residenzplatz Square. ‘Sixteen Going On Seventeen’ was shot in a cute pavilion in Leopoldskron Castle, that’s now been relocated to the grounds of Hellbrunn Castle (Fürstenweg 37). Talk about a happy tourist Trapp. 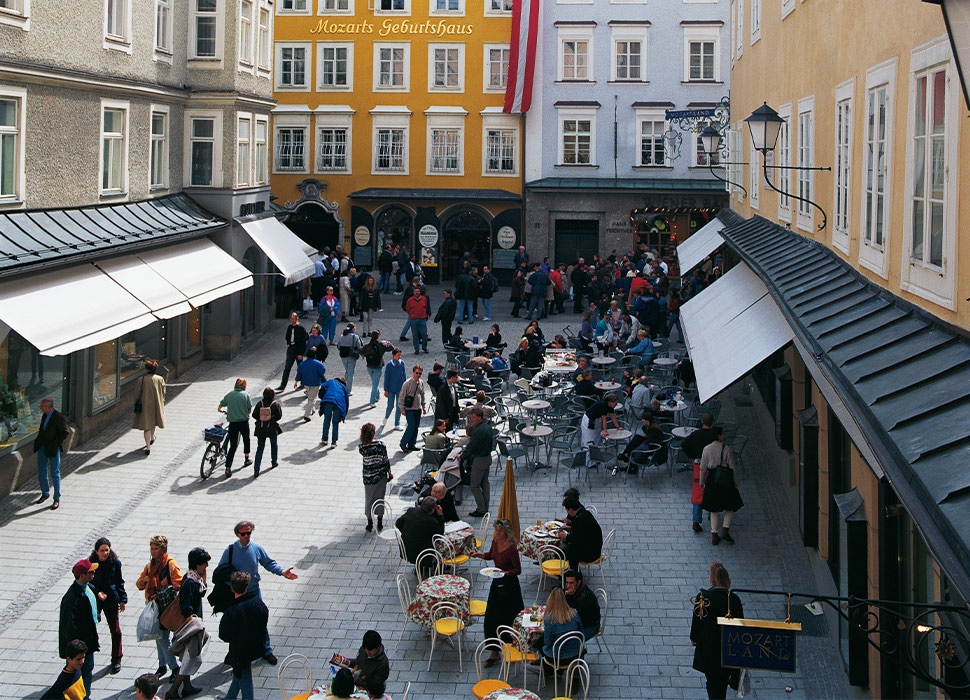 Salzburg is rightly proud of its most famous son, and you don’t need to look far to find the beloved muso’s likeness on souvenirs and basically any spare surface. See if any of the great maestro’s melodic magic rubs off on you at the Mozart's Birthplace museum (Getreidegasse 9), or the posh pad he moved into after becoming famous (Makartplatz 8), now the Mozart's Residence museum. For best results, check listings and book a show at the Mozarteum (Schwarzstraße 26), a lavishly decorated concert hall with a diverse programme celebrating the work of the youthful ivory-tinkler.