The best restaurants in Malaga 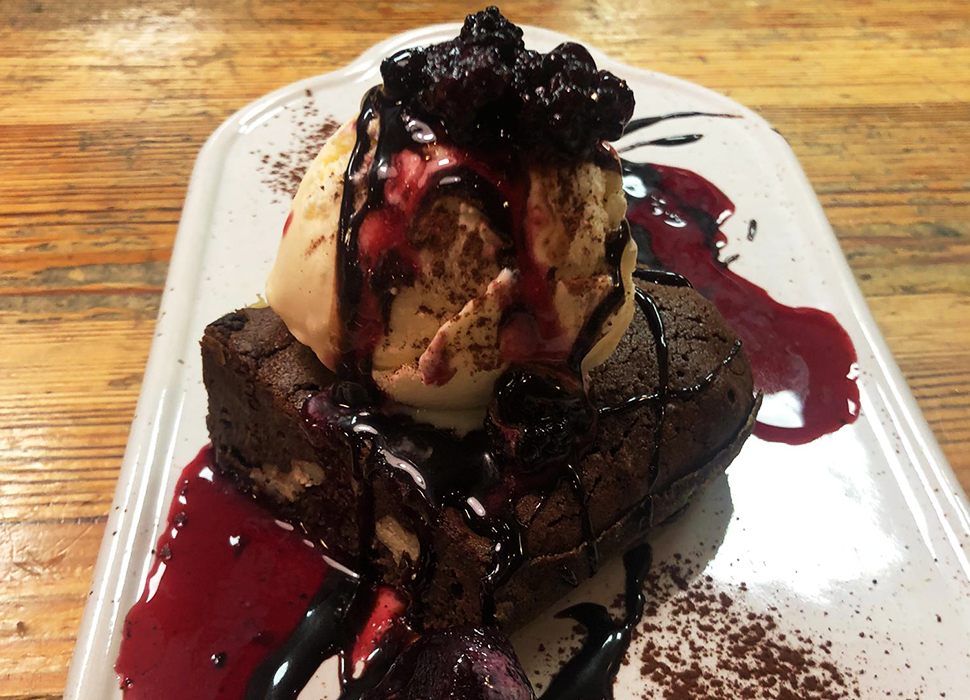 Argentine expat Gabriel Spatz opened this worth-the-hype tapas crowd-pleaser in 2008, and it’s now part of a chainlet of bar-restaurants in the same La Merced neighbourhood. Hugely popular, malagueños love them all, it seems, and for good reason: modern without feeling overly messed-with, the cleverly rejigged tapas here show incredible care and precision and can be ordered in media raciónes (half portions) or raciónes (full portions). Book ahead or don’t bother.

The best things to do in Malaga 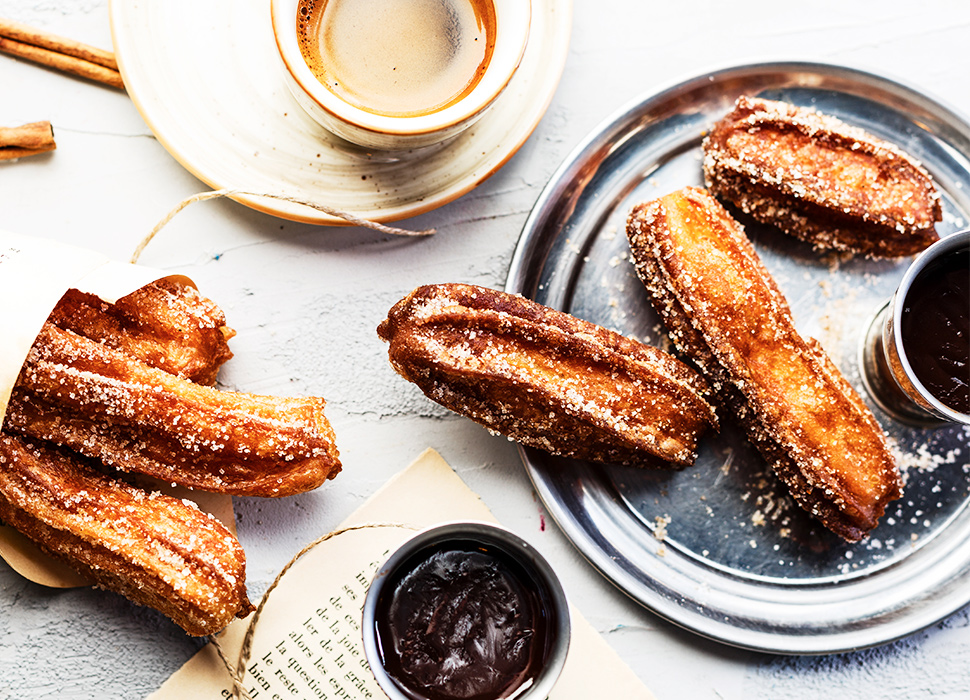 Don't leave Spain without trying one of these twisty snacks / Image: Getty Images

The downside to this 1932-opened churros bar next to the food market? Well, you definitely won’t be the only person here. Still, it’s well worth the hustle for the chance to bend an elbow at the bar of one of Malaga’s most cherished cafes to snack on Spain’s classic, star-tube-shaped doughnuts dipped in rich molten chocolate. The best in town? Yes, but who cares, anyway. It’s the vibe that makes it. A stone-cold must-stop, smiles guaranteed. 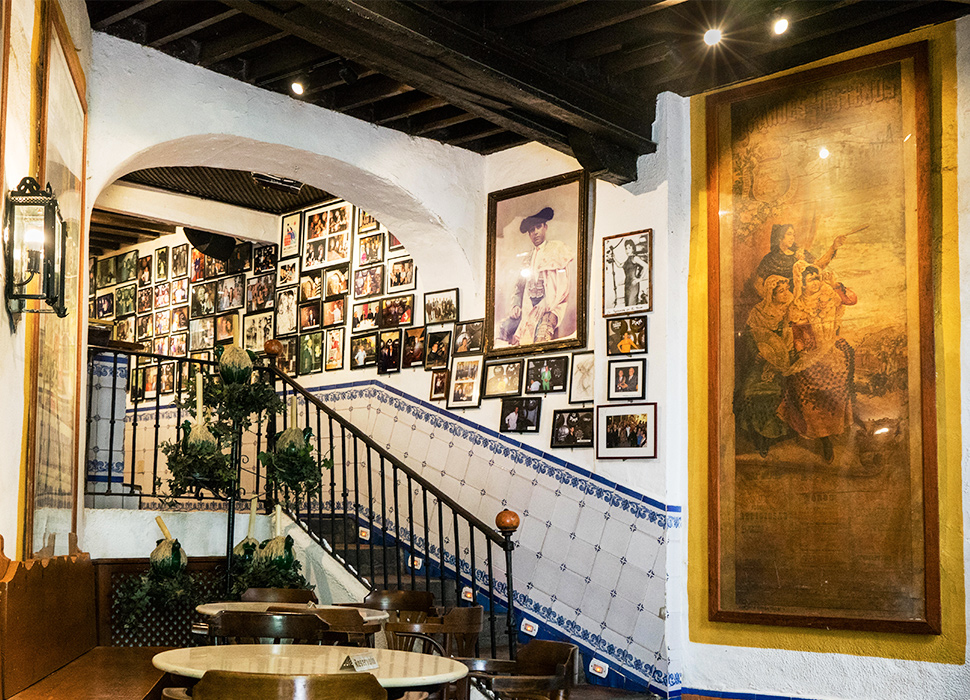 You won't find a more atmospheric place to eat in the city / Image: Alamy

The word 'institution' gets bandied around a lot in cities with long-standing restaurants but, for once, the title is deserved when describing El Pimpi. This made-in-Malaga mini-empire actually consists of four different tapas bar-restaurants all under one delightful roof – an 18th-century house near the Alcazaba. Our favourite spot? The upbeat, stand-up bodega bar always features a crowd spilling out onto the street, and does solid local Andalusian-style tapas (albeit at slightly above-average prices). Order a vermouth if you want to fit in.

Soho is often called the city’s trendy part of town and not without reason. Odd, then, that one of its best places to eat is a decidedly un-contemporary throwback bodega. Still, old is gold – thankfully, it’s traditional in the all the right places, including its warm, gentlemanly service and uncomplicated, ingredient-centred cooking. Go for that hard-to-fault, classic Spanish tapas experience that makes by far the best bet for lunch if you’re visiting any of the nearby art museums (and you should). 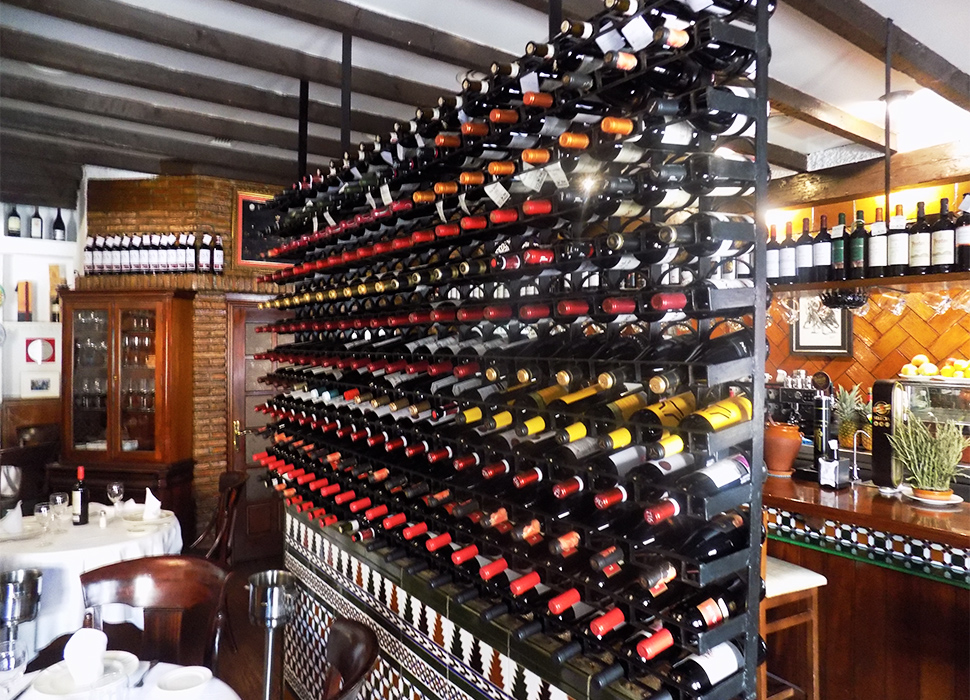 You won't go thirsty at this old-school joint

This avowedly untrendy-in-a-good-way family restaurant on Pasaje Esperanto is a stalwart for regional specialties. Son of founder Juan Manuel Ramírez Romero, Juanma, keeps things ticking along with a kitchen known for simply nailing the meat-fish classics. The house-made rice pudding (arroz con leche) is how to do as locals do for dessert. 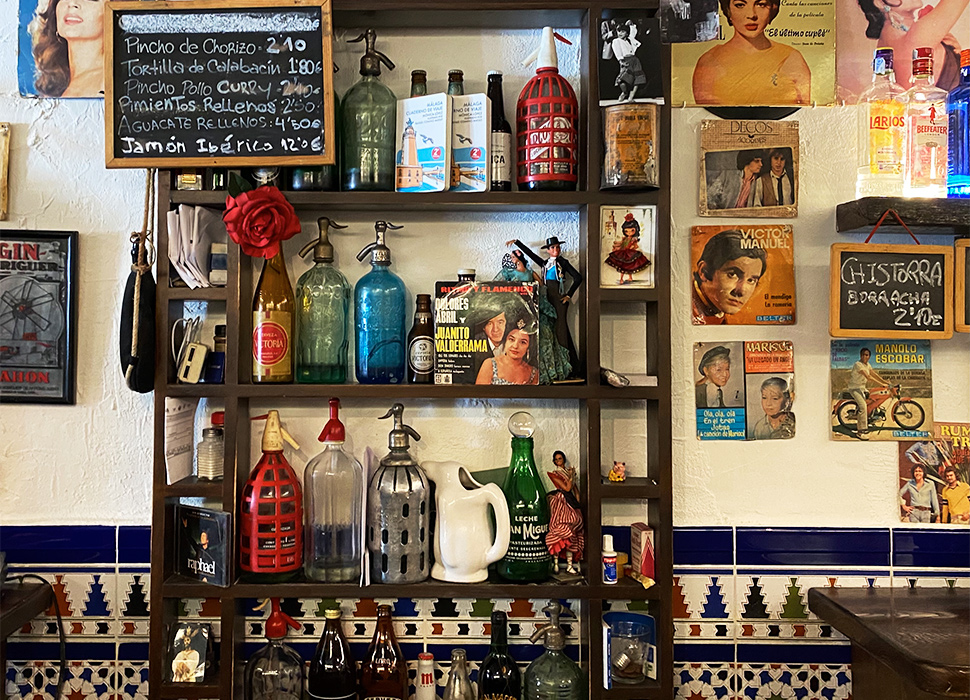 It's all about the vibes at La Tranca / Image: La Tranca

If you land late Friday afternoon-evening and you want to get straight on it at somewhere with a serious pulse, head direct to La Tranca, a vibe-y tapas-bar in La Merced that is traditional bodega meets hipster record bar. Crowded, yes, and the food is only OK, but if you like pretty people and some BPM with your empanadas, this is as upbeat an entrée to your weekend as you’ll get. Open until 2am. 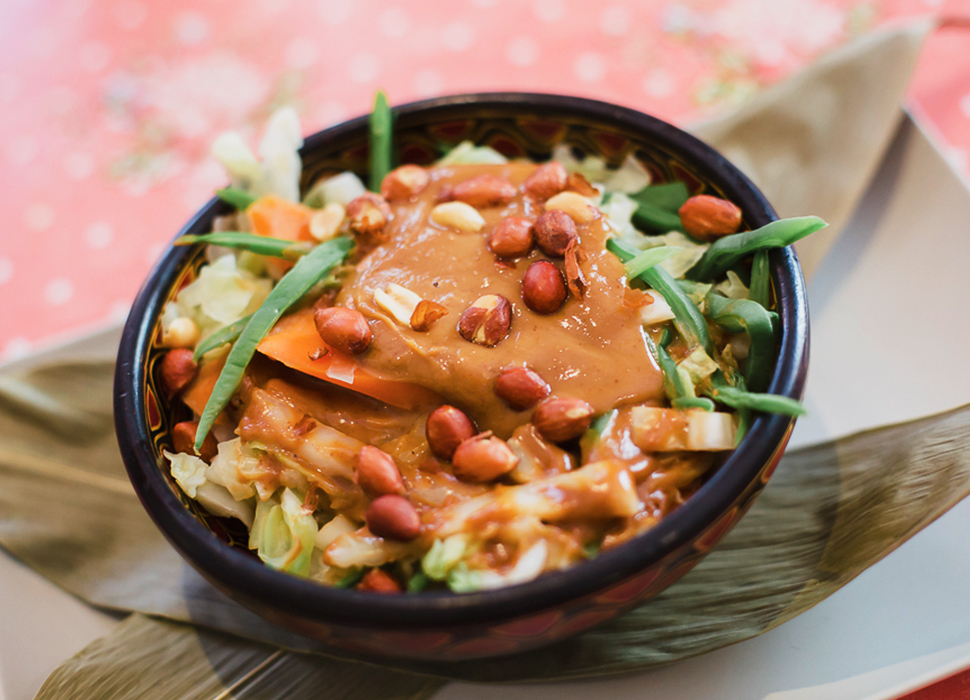 It’s obviously impossible to get bored of classic Spanish tapas in Malaga, but if there’s one place that might tempt us from the right-and-proper path of the gambas de pil-pil (sizzling spicy prawns: don’t miss), then it’s this wonderfully colourful cafe-restaurant in Soho. Owner-chefs Marcel and Leiticia’s menu feature health-conscious takes on dishes tasted on their world travels, so expect anything on a daily-changing menu, from fish tacos to ayam padang (Indonesian chicken curry). 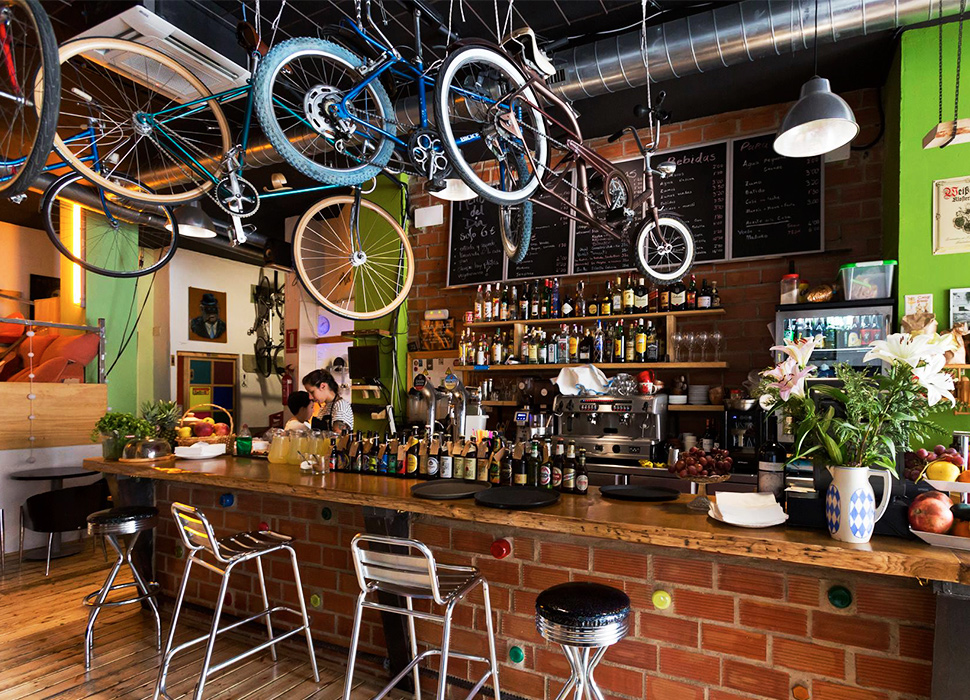 Malaga isn’t all tradition-steeped bodegas. This trendy bike shop-café hybrid goes well out of its way for vegetarians and vegans on a fairly straightforward menu of cheap, healthy sandwiches, cakes and well-made coffee. Daily bike hire is also available. Not far away, pretty, Pinterest-friendly Julia Bakery is also worth a mention for its ace pastries, the city’s best sourdough and more than just a faint nod to herbivores. 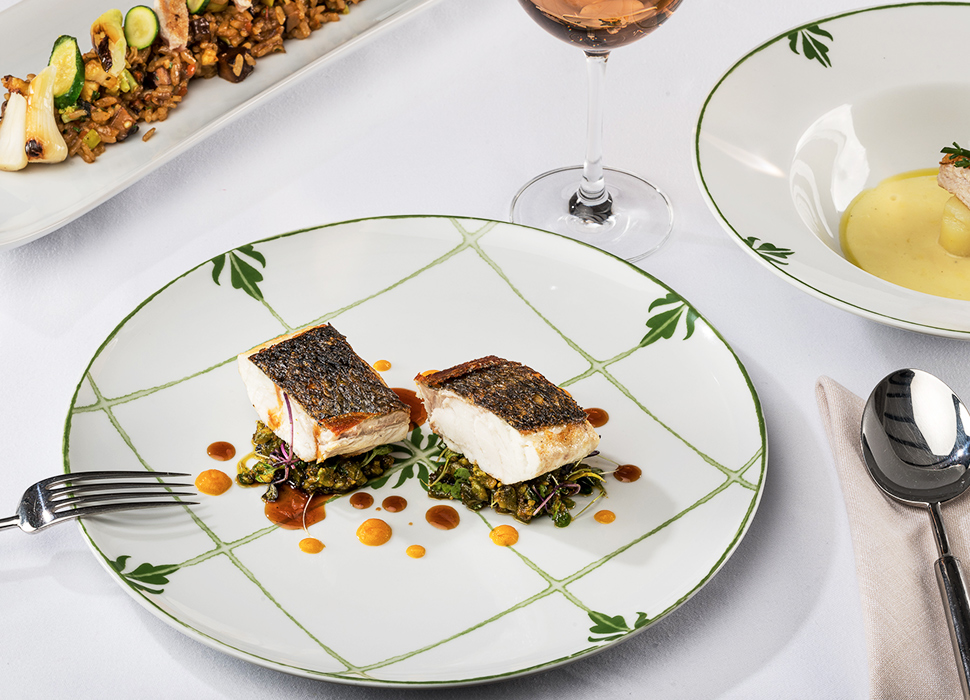 Balusta's painterly dishes are almost too pretty to eat

Opened in 2019, super-central Palacio Solecio is Malaga’s coolest boutique hotel: a bright, faintly Wes Anderson-y conversion of an 18th-century Moorish-style palace. Inside, you'll find one of the city’s most architecturally distinct dining rooms in the shape of Balausta. Chef José Carlos Garcia converts bygone Andalusian recipes into art-on-a-plate dishes that show imagination but have enough heft for a coffee order. Decent value compared to the city’s other fine-diners. Prepare to squash some Insta-urges.

The best things to do in Malaga