Archaeological wonders, art of all stripes, Maradona mania and, of course, the world's best pizza... the colourful port of Naples has it going on. Here are our top tips

1. Dig the ancient beauties at the National Archaeological Museum 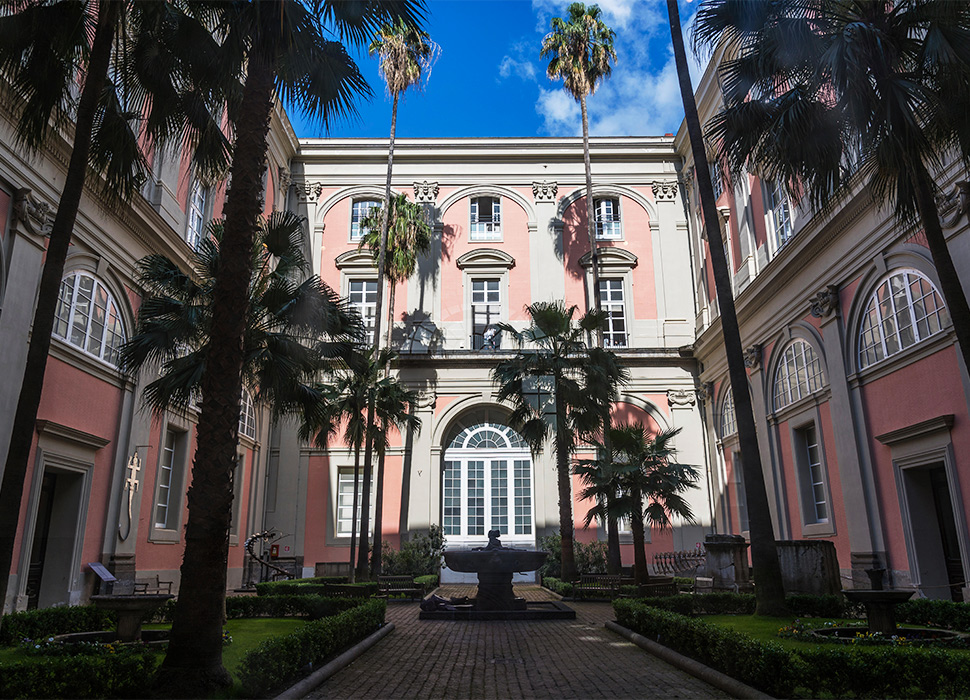 In a hefty space that was once a cavalry barracks, Naples’ Museo Archeologico Nazionale is home to one of the most significant collections of ancient-world masterpieces anywhere on Earth. Expect to see impeccably preserved mosaics salvaged from nearby Pompeii and Herculaneum – in particular ‘The Battle of Alexander against Dario’, which you’ll likely recognise if you see it. Most people, if they’re honest, make a beeline for the semi-hidden room of erotica, which is chock-full of bulbous stone phalluses and ravaged lady goats. Hey – it was a different time.

2. Have your mind blown at Pompeii 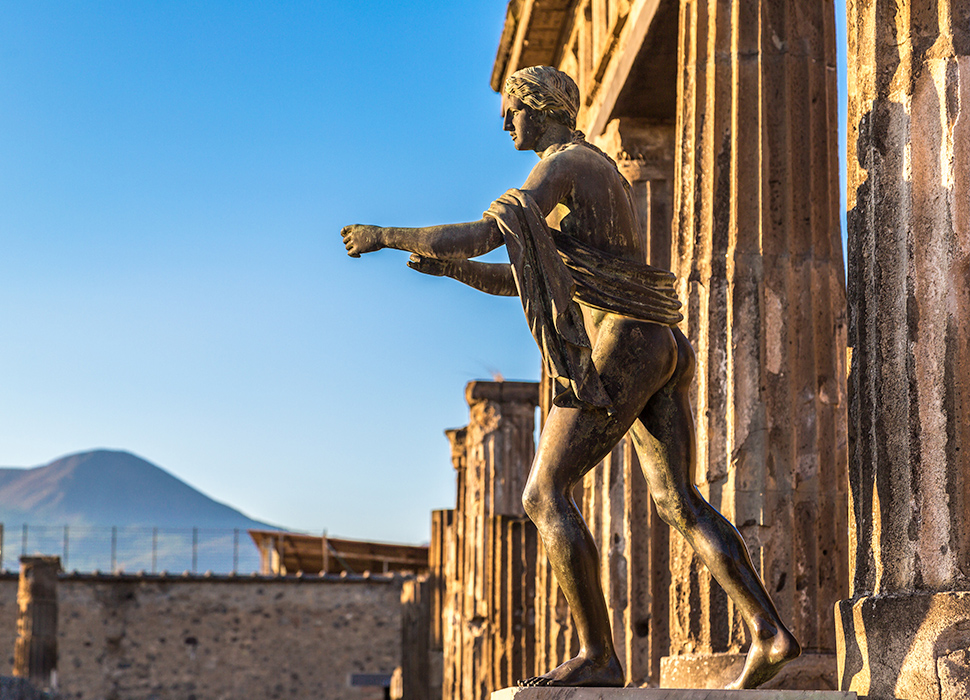 A violent volcanic explosion in AD79 blew the top of Mount Vesuvius straight up into the sky, causing an unpleasant rush of superheated rock, ash and toxic gas to surge into the important Roman port of Pompeii at around 100mph. Predictably, it wiped out both the city and its populace. Today their remains are eerily well preserved, including a bloke looting a jewellery shop, a mother shielding her child and an undeniably cute dog. Do visit if you’re in the area, for a bracing reminder of mankind’s fragility in the face of nature.

3. Snap up a stylish souvenir on Via San Gregorio Armeno 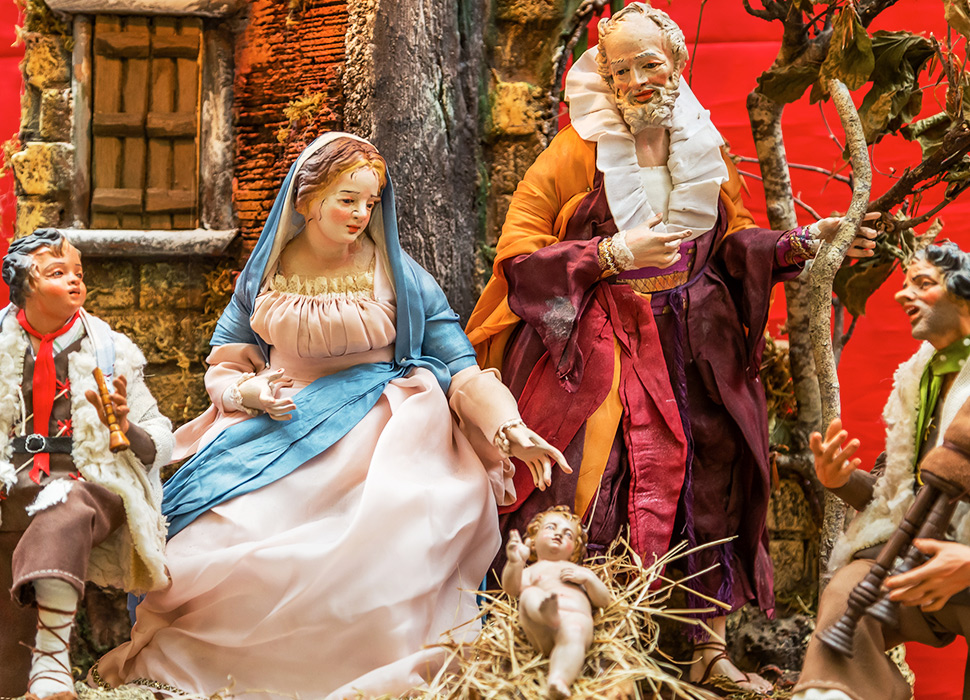 Naples’ cutest shopping street has been thrumming with the happy hubbub of artisanal activity since way back in Greco-Roman times. Over the centuries it’s become especially associated with presipio – an Italian word for what we’d call Nativity scenes. Here, you should pick up an adorable terracotta figurine, which are often based around religious themes (but these days just as likely to be popular celebrities, global politicians or, this being Naples, footballers). It's the quintessential Neapolitan souvenir.

4. Drink in the vibes around Piazza Bellini 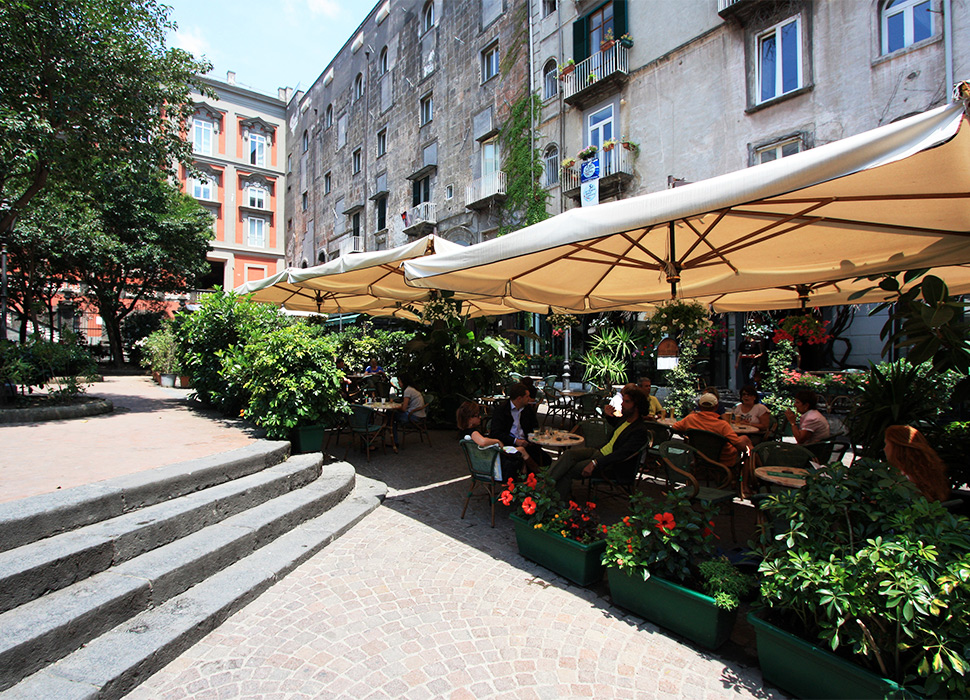 This lively piazza was named in dedication of local lad and operatic bigwig Vincenzo Bellini – also known as ‘the swan of Catania’ for his melodious warbling – and the bars and restaurants around its edge echo daily to the happy chatter and flirting of local office workers, students and savvy tourists alike. If you like your history, there are some excavated 4th-century Greek walls to poke about among. Or simply make for the raft of lovely bars where you can get yourself merrily refreshed on aperitivos and chat up the cheery locals.

5. Bone up on history at Fontanelle Cemetery 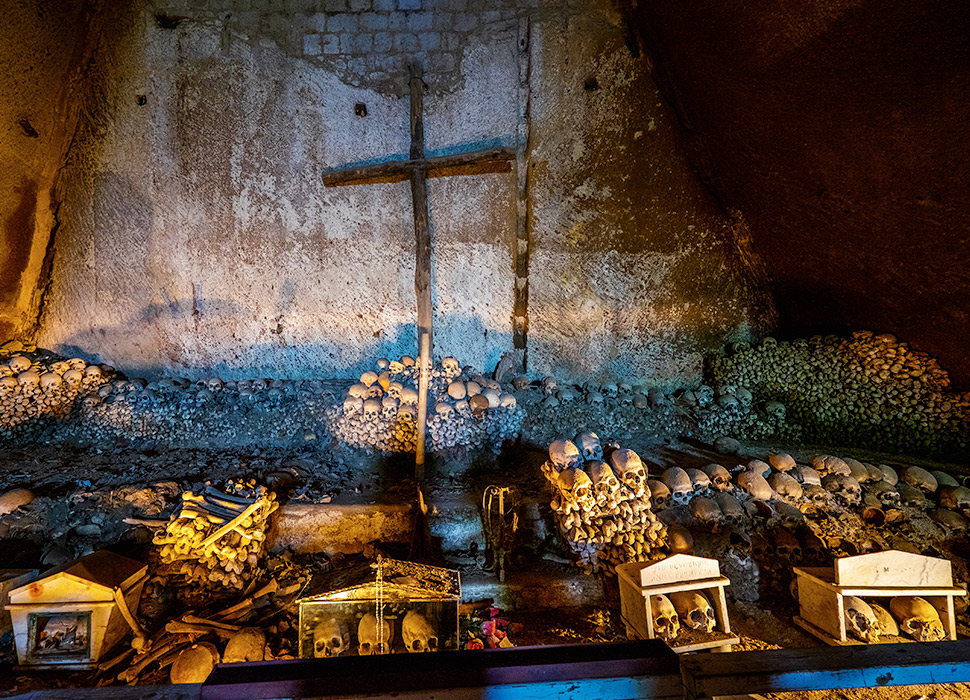 Some 40,000 skulls – according to the latest head count – provide an eerie backdrop for visitors to this ossuary, originally created to house the luckless dead from a vicious 17th-century plague outbreak. What makes Fontanelle especially worth a visit is the cult-like status attached to certain remains, especially since World War II – local nonnas often visit and tend to the same remains again and again, seeking solace, prophecy, good luck and (if they play their cards right) next week’s winning lotto numbers. Reservations – and a strong stomach – essential. 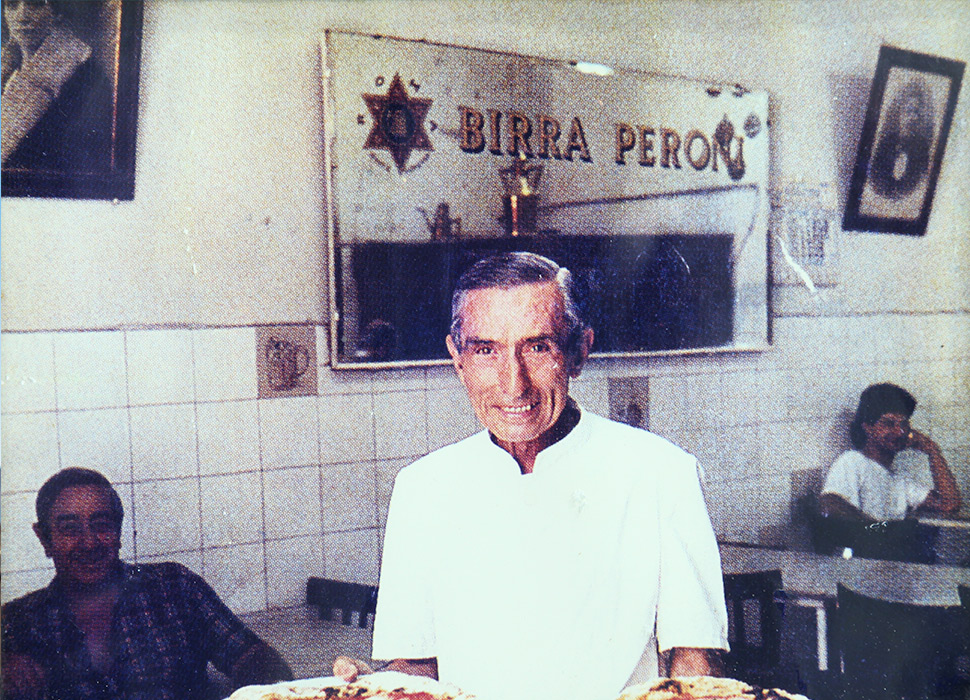 The world’s favourite food – pizza, obvs – was quite literally invented in Naples. To celebrate the 19th-century royal visit of one Margherita of Savoy (yeah, you're on the right lines), local chef Raffaele Esposito garnished some flatbread with tomato, mozzarella and basil to represent the colours of the Italian flag. This here joint – L’Antica Pizzeria da Michele – was founded in 1870, is still run by the same Condurro family, and is popularly considered the best pizza place in town. They keep it militantly simple – it's a margherita or a marinara or nothing else – and do it oh-so right. 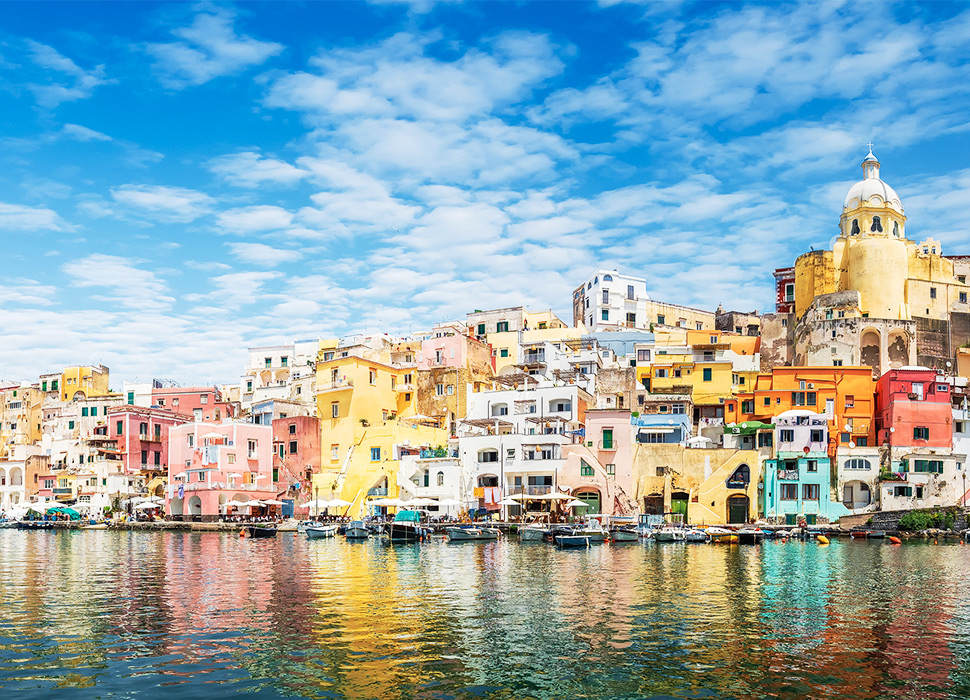 The colourful front on Procida made famous by Il Postino / Image : Getty Images

If you can make time to take a ferry and explore the islands dotted prettily across the twinkling bay of Naples, then you might naturally make a beeline for famous Capri, or the chichi yacht-lover haven of Ischia. But modest Procida is the one if you want to immerse yourself in the true Italian lifestyle. For best results – and photos – head to the Corricella, a haphazard jumble of fisherman’s cottages laced with steep stone steps, where you certainly won’t struggle to find a bar with an outside table and (usually) a friendly in-house cat or three.

8. Stroke your chin to the contemporary classics at MADRE 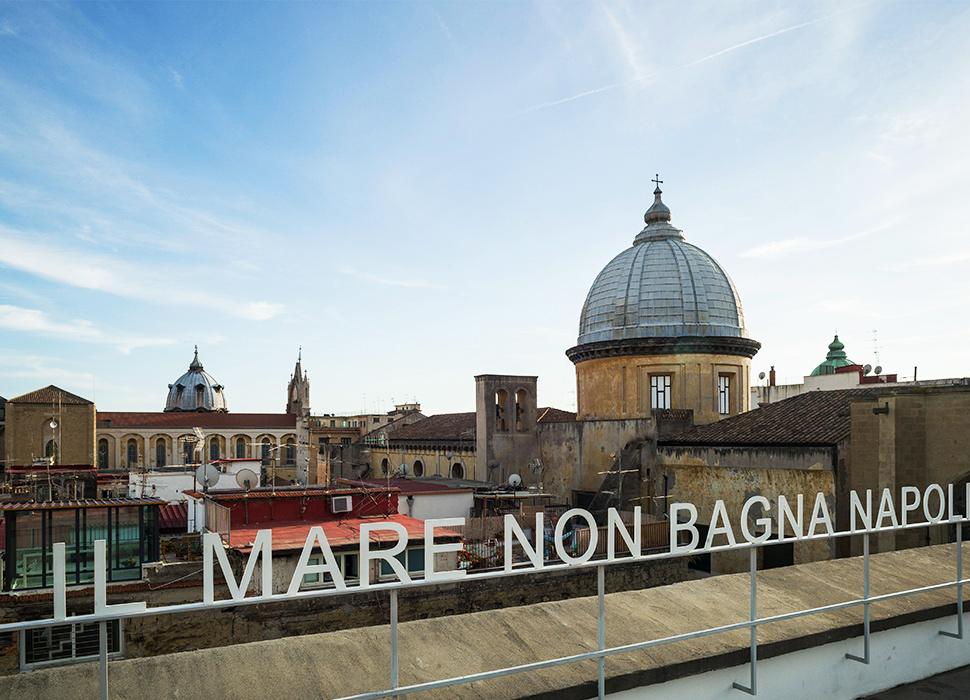 A view from the roof at MADRE / Image: Alamy

Get your contemporary culture fix at the Museo d’Arte Contemporanea Donnaregina (or MADRE), a proper world-class exhibition of up-to-date works from international superstars like Jeff Koons and Anish Kapoor, as well as home-grown talent like Mimmo Paladino and Giulio Paolini. Set across three floors of a centrally situated 19th-century palazzo – named after the 13th-century monastery that you can still mooch around – MADRE makes a point of hosting classes and theatrical workshops supported by local arts bodies. So it’s a worthy place to support, as well as being stupendously easy on the eye.

9. Pitch up at Stadio San Paolo 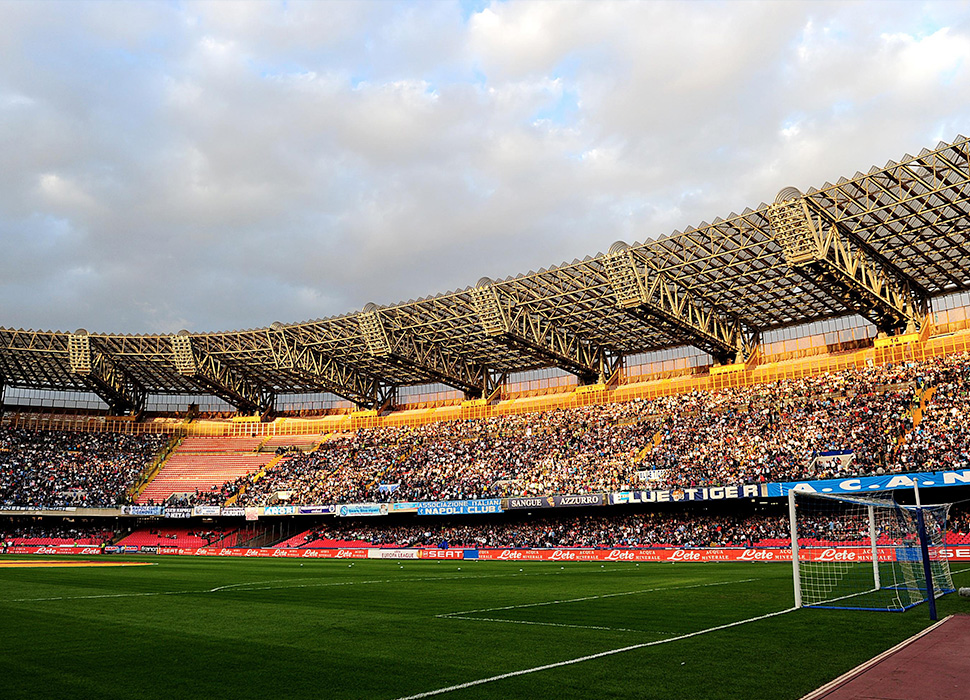 Stadio San Paulo might be the spiritual heart of Naples / Image: Alamy

No visit to Naples is ever really complete without paying homage to the sainted local team. The late Diego Maradona memorably plied his trade here in the 1980s, and has taken on something of a godlike status – nearby post-match watering hole Bar Nilo boasts an actual shrine containing a wiry strand of the famous attacking midfielder’s hair. Stadio San Paolo doesn’t have a museum, as such – but on match days, if you’re lucky enough to bag a ticket, they let their feet do all the exhibition stuff.

10. Marvel at the monolithic murals 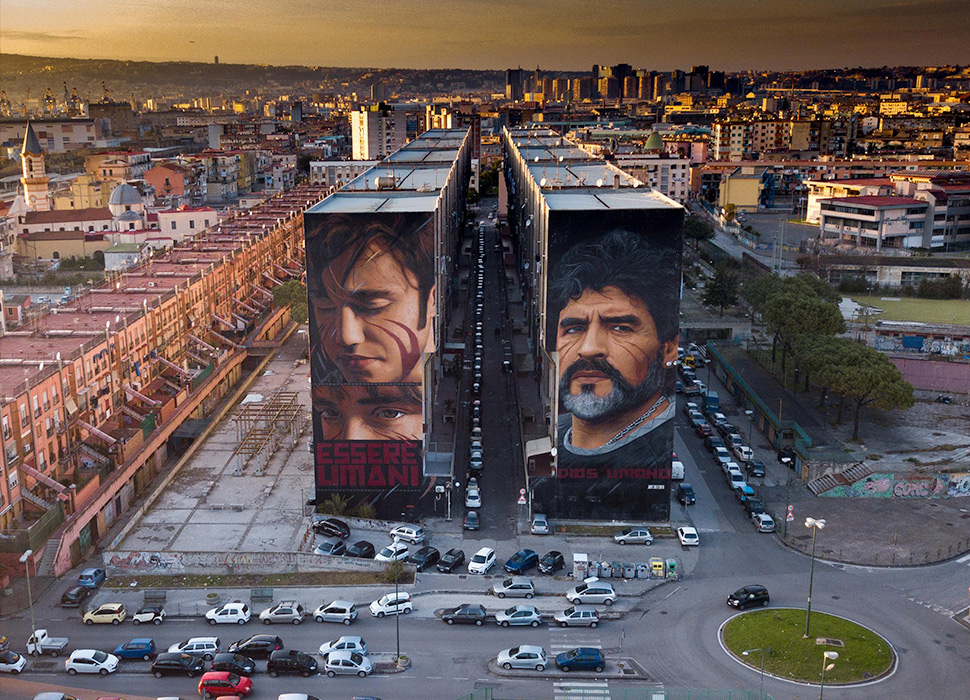 Maradona – aka 'el Pibe de Oro' or 'the Golden Boy' – features heavily in another great Neapolitan institution: enormous street murals. Such oversized paintings are all over the place, with the creation of some – like Banksy’s Madonna with a Pistol on Piazza dei Girolamini – not only encouraged, but protected by law. The works of noted artist Jorit Agoch, too, are worth seeking out for their photorealistic, iconographic style; if you’re short on time, the Golden Boy’s face on the side of an apartment building (via Taverna del Ferro) was personally endorsed by the player, and is an extremely satisfying goal.